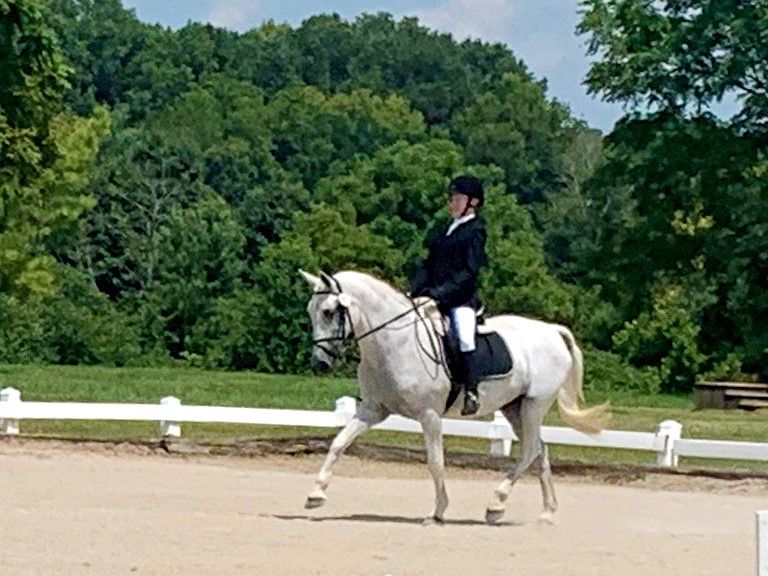 Mica was bred for dressage (seven of her great-grandparents were Lipizzaners; one was an Arab) but she much prefers to run and jump.  She came to me in 2004 through the good auspices of her owner’s dressage trainer.  My horse had recently had to be retired; I was looking for another.  Mica was not really what I had in mind – she was a little too old and a little too short – but the trainer convinced me to try her.  Mica hadn’t had much experience jumping but when I took her over a 2’9” jump it was clear she really liked it and could do much more.  My instructor at the time was very enthusiastic and the vet who checked her declared her a “sturdy little thing.”  And so Mica came to me.  I could say that I bought her, but adopted is a better term.

Mica may have jumped well during the trial ride, but she proved a nervous jumper.  It was a long time before she started taking me to jumps; she usually wanted to pause for a look.  There is a video of a cross-country round in which she swapped leads every three strides going towards the first jump.  But, as the dressage trainer had told me, Mica always knows where her feet are.  She is also very good at judging distances; she always got herself to the perfect take-off spot, even if doing so meant putting three strides in a two-stride combination or two strides in a one-stride.  I learned to go with her, and we eventually completed three horse trials at the Training level.

I would like to be able to say that I took full advantage of Mica’s ability to do dressage but that wasn’t the case.  Maybe I was too old (43) when I started riding; maybe she just wasn’t so easy.  We did get some good ribbons at Novice level horse trials, but I would have liked to do better.

What Mica and I do have is an intense relationship.  She is very reserved, but also very smart and opinionated.  Some years ago, I began walking with her around the farm with no physical contact.  She clearly likes that and is nearly always a perfect lady.  But will she allow me to catch her in the field?  Certainly not, or at least not without my chasing her for most of an hour.  We think she fancies herself a queen, and that she views being caught in front of other horses as beneath her dignity.  And maybe she views running away from me as our game – a game that she likes much better than I do.  In any event the schedule for riding her is now based on when all the horses are already in their stalls.

As she got older Mica told me she didn’t want to go over larger jumps anymore.  She was half-leased by a younger girl who did some low jumping and then by an older, very experienced dressage rider.  Then she became fully mine again.  In her older age I had to be careful not to do too much but found I still needed to take her out into an open field occasionally and let her have a few faster strides.  Earlier this summer I took her over a few 2’6” jumps and discovered how much she still loves it.  When I asked the vet whether doing so would hurt Mica the vet said going over a few such jumps occasionally would be fine.  Then the vet asked me if I knew about the Century Club.  It turned out that Mica and I would become eligible in six weeks.

The best part of the Century Club ride was that in preparing for it I discovered I could, if I gave it my all, get her to do short stretches of reasonable dressage.  Every week it gets easier.  We’re past her best years but every ride is a real pleasure.  She seems to feel the same way.