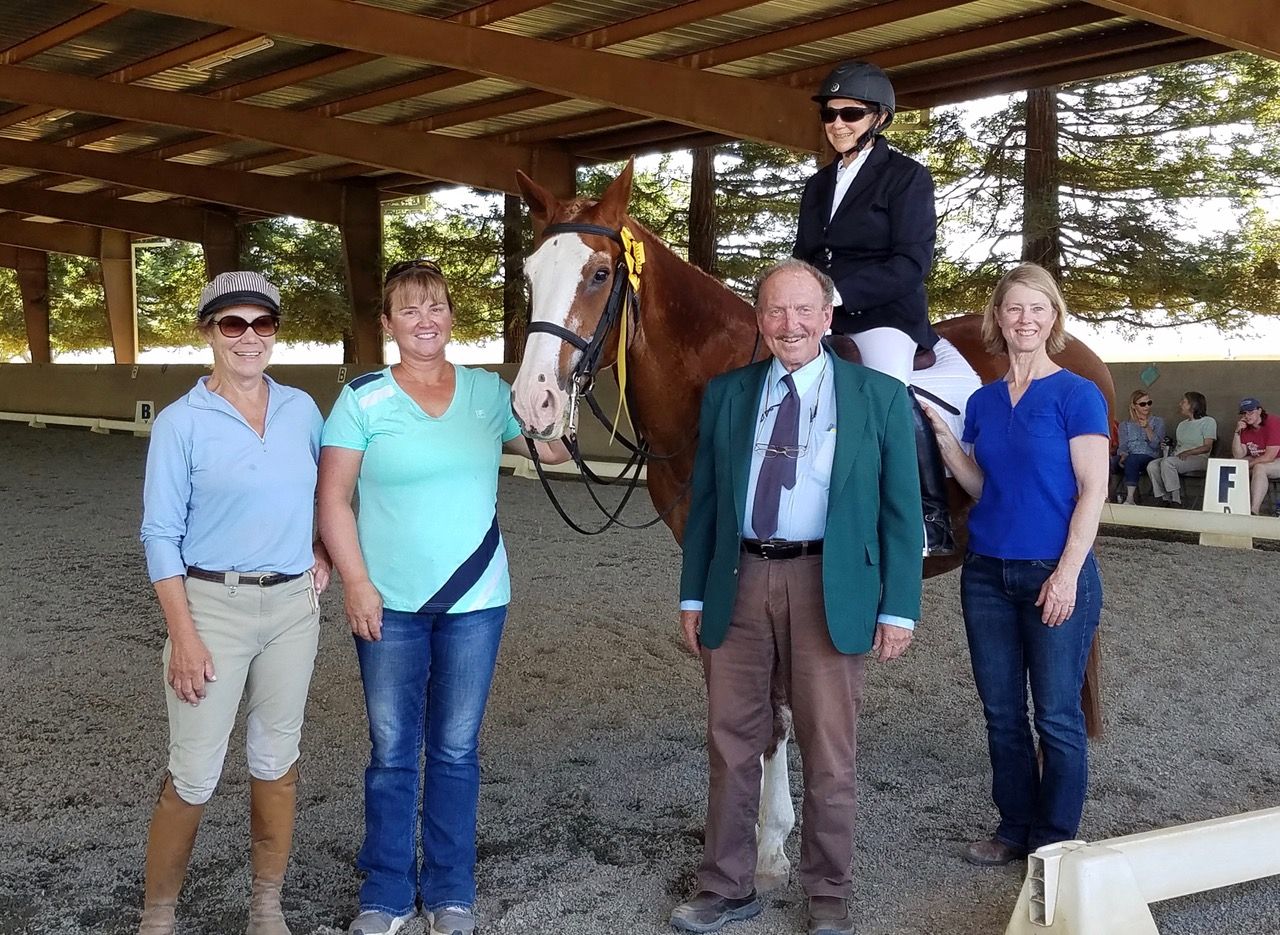 Lalique’s story really begins long before she was born, when I was in college and a friend of mine introduced me to Inez Fort saying, “She has a lot of horses, I bet she’d take you riding.” Inez, one of the most generous people in the world, did indeed take me riding, and introduced me to dressage. We became close friends and remained friends until her death last year. Fast forward to a few years before Lali’s birth, when Inez discovered Lily’s Lupine, a Thoroughbred mare in another friend’s backyard and bought her. Lupine had originally been acquired to be bred to warmblood stallions. Her owner died, which is why she was hanging out in his mother’s back yard. Inez asked me if I’d like to co-own Lupine – we could each have a foal from her and then we could breed and sell more foals. I happily agreed.

We bred her to Taxateur and I eagerly awaited my bay colt, who turned out to be a chestnut filly with a ton of chrome. At first, I was disappointed – I really wanted that bay colt, but it has always been hard not to fall in love with Lali, and soon I couldn’t imagine having anything but a wonderful red-headed girl! Lali spent her first eight months or so at Inez’s and then moved to a breeding farm near me, where she grew up in a big pasture with three other babies. I visited her often, even on a daily basis for about two months to medicate a cut she got. Looking back, I wonder whether those two months weren’t part of the reason we have been so closely bonded ever since.

I was very lucky in those early days to take lessons from Liz Searle and Jeff Moore. Liz and Jeff owned first Molehaven in Soquel and then Osierlea in San Juan Bautista. Not only was Liz a wonderful instructor, but probably more important, she created a great atmosphere wherever she went. I didn’t realize then how lucky I was to be introduced to dressage in such a supportive environment, where other boarders and students were just as proud of me the first time I rode in a Training Level test as they were of Jeff when he won a Grand Prix class, or later of Chelsey Sibley when she won gold medals at the NAYRC. There was never any of the negativism I’ve since seen at “dressage” barns, and having been spoiled by Liz and Jeff, I have always sought out facilities with a similar positive atmosphere.

I was also lucky to have the privilege of twice a year clinics with Baron Hans von Blixen Finecke, a wonderful instructor from Sweden. “The Baron,” as we all called him, had won the three-day gold medal in 1952 and watched a horse he had trained win the dressage gold that same year (he was not allowed to ride in both events). He was a wonderfully knowledgeable horseman, and always put the horses first.

The Baron was one of many instructors who became members of Lali’s fan club, because of her mind, much more than her body (not that there is anything wrong with her body). She always wants to do what you want her to, and just loves learning. We discovered that she wanted lessons way back when she was about a year or two old. I was taking a lesson from Liz at Oakland’s Sequoia Arena, a very large fenced arena in Redwood Regional Park. As we often did, Inez and I had brought several horses to the clinic and I brought Lali along for the experience. We normally just let the horses who weren’t being ridden hang out at the far end of the arena, and I put Lali there with the others when I went in for my lesson. She, however, was having none of that – within about 5 minutes, she was trotting along right next to me, wondering what this was all about!

The Baron helped me with Lali from the very beginning – he was there at Osierlea when I got on her for the first time – one of many times she spoiled me – it was just nothing. I lay over her back for a minute, then sat up and she just looked back at me and then carried on walking on the lunge line. He advised me about how to bring her along. The one thing he failed to achieve for us was piaffe. Neither he nor I could get it. When the light bulb finally went on for Lali, she piaffed! I could almost hear her saying, “Was this what you wanted all along?” I hoped that the Baron might be looking down from above to see that we had finally figured it out.

In 2008, Susie Wren, another Osierlea-ite, was diagnosed with cancer and had surgery then chemo. She didn’t know her prognosis and mentioned to Chelsey and her mother, Kathy, that one thing she wished she could do before she died was earn her USDF bronze medal, but she didn’t have a horse who could do Third Level. Kathy suggested to me that I lend Susie Lali, who could do the Third Level test in her sleep. I did, Susie earned the bronze medal, and also recovered. The next year, Susie borrowed Lali again and earned the silver medal and a few years later, the gold. I know Lali enjoyed those shows with Susie – she’s always been a complete ham who loves an audience.

Lali was probably about 15 when she and I figured out the one-tempis, the last piece of the Grand Prix for us. When we got it, Chelsey said, “Now we’ll have to show her at Grand Prix.” I’ve never been much for showing and responded, “I hope ‘we’ means you.” She said, “No, you!” I’m not sure how I came up with my excuse to avoid showing, but I did. I said, “If we can still do the Grand Prix when we’re 100, I’ll ride it for the Century Club.” That worked to keep Chelsey from pushing me to show until 2018 when we actually did turn 100 and could still do the Grand Prix movements!