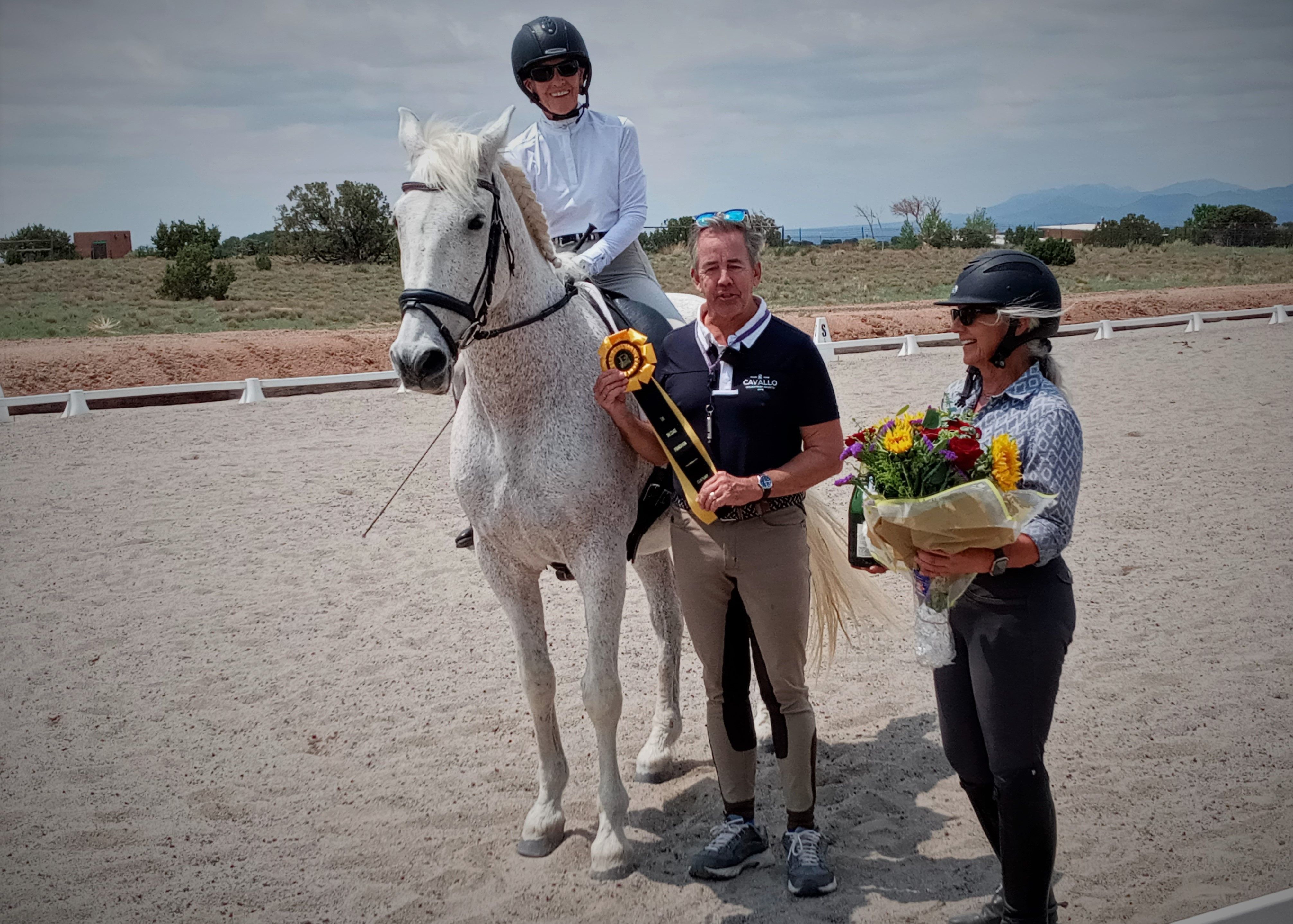 It was the week of her 71st birthday when Janet took her first riding lesson at the grounds of Santa Fe Sport Horse in Santa Fe, NM.  Her lesson was scheduled with Andrea Vassallo, owner and trainer extraordinaire.  Janet had met Leslie Apfel, an accomplished USEF competitor and trainer who worked with Andrea, and suggested that lessons with Andrea would be a good match for her.  At this point in her life, Janet had only been on a horse for a few vacation trail rides and was eager to get comfortable on horseback in preparation for her upcoming week at a dude ranch in Wyoming.  Janet did not foresee the next three-plus years.

To her good fortune, the horse Janet would ride for her first lesson was Joselito, a 23-year-old Andalusian.  Joselito’s sire had competed at the 1992 Barcelona Olympics and was purchased at that event by a Texas breeder who brought him to the United States.  Joselito was used as a breeding stallion for the first 12 years of his life, and amazingly, did not begin to train in dressage until the age of 15.

Janet was born in Chicago into a large family where education was a priority, but there were no spare funds for luxury items such as horseback riding or lessons.  Her lifelong love of horses was cemented when her childhood friend bought a horse and Janet spent a summer hanging around the barn, but just as an observer.

Janet attended St. Xavier College, and then DePaul University for her Master's in Accounting.  After college, she worked for several years in management positions before hiring on as a Systems Engineer with IBM.  During her 25-year career there, Janet advanced through the management ranks to Global Internet Marketing Program Manager before retiring and starting her own business.  Despite a demanding travel schedule and workload over the years, Janet always made time for staying fit and considers her completion of the Chicago Marathon a momentous event in her life.

In 2000, Janet and her husband, Horst, moved to Santa Fe, New Mexico.  Immediately upon her retirement from IBM in 2002, Janet went back to school, completing the Fashion Design program at Santa Fe Community College, where she honed the seamstress skills she had learned as a child.  For relaxation, she hiked in the Santa Fe mountains and other parts of the West with friends.  Although for many years she played competitive USTA tennis and served as team captain, a hand injury ended her tennis days.  That provided the impetus for her to return to one of her first loves, horses.

Janet now decided to take on the challenge of dressage.  After about four to six months on the lunge line, she was riding around the arena, still on Joselito, who was now available to her full-time.  Always needing a goal to shoot for, Janet was encouraged by Andrea to set her sights on a Century Club ride in 2021 because Joselito would turn 26 and Janet would be 74.  So the training became more intense in pursuit of that goal.  During the three-plus years of lessons, Janet and Joselito have formed a bond that has forever enriched both their lives. 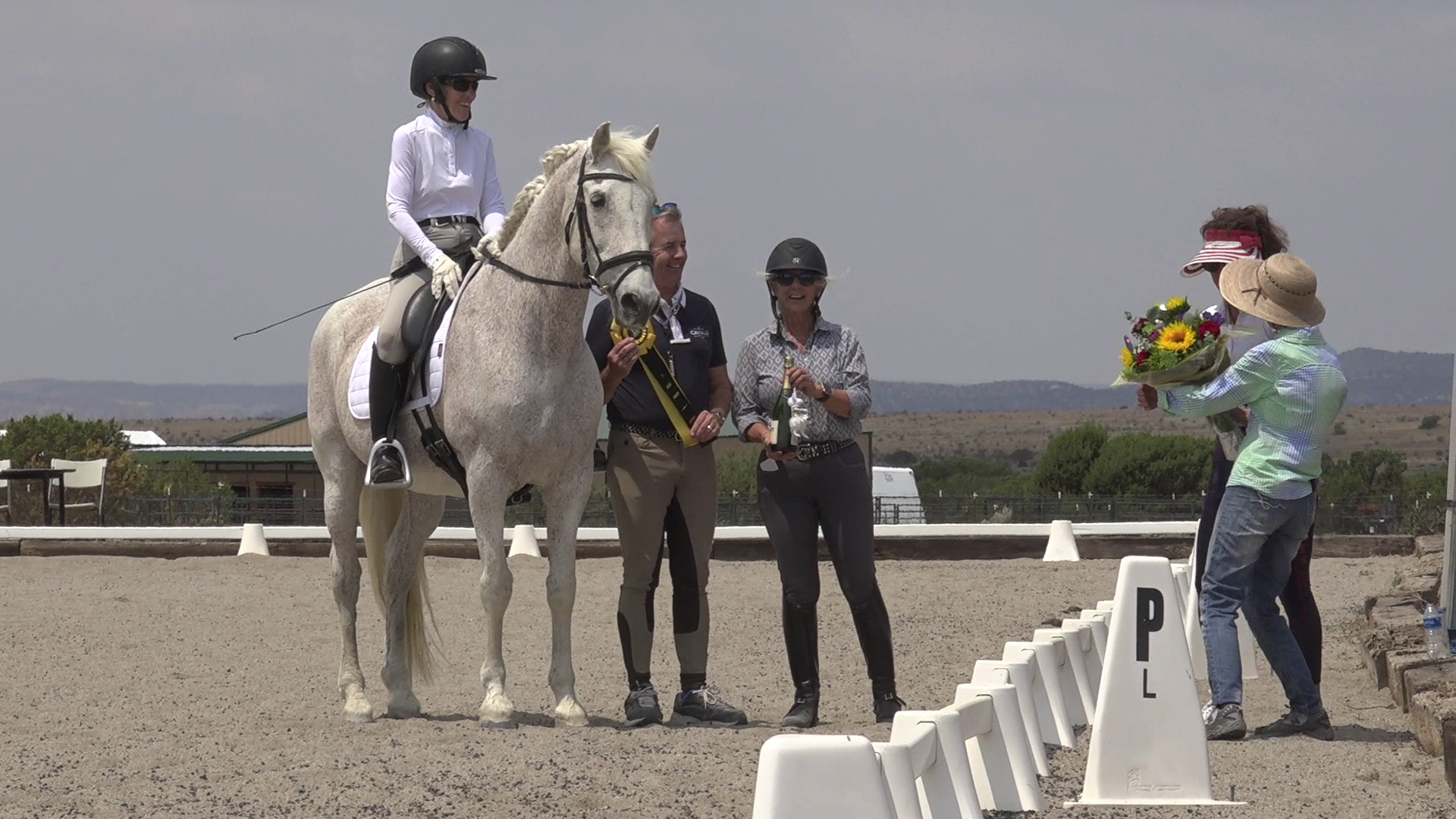