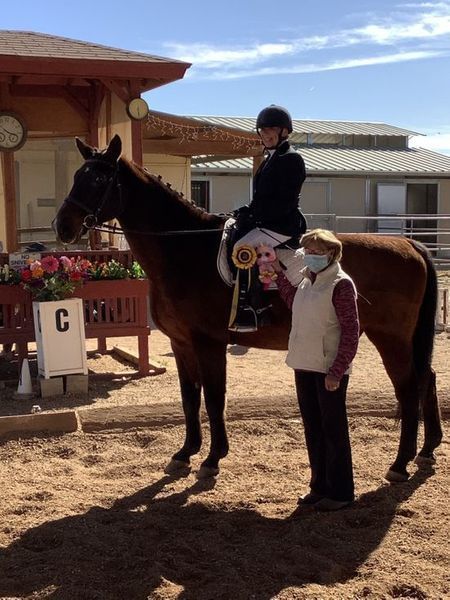 My love of horses has been lifelong, but like so many horse-obsessed kids, there was little opportunity for me to actually interact with horses. I was born in Jersey City, the oldest of four children in a working-class non-horsey family so riding was a very rare treat, usually a pony ride or trip to a rental stable. TV Westerns, “Zorro,” “National Velvet,” and books kept the love alive, and I swore that someday I would own my own horse. That dream came true but not until I was 53, and I did not begin formal riding or training until my late 40s, and then by an odd twist of fate. Riding for the Century Club fulfilled both the dreams of the kid and the goals of the adult.

Over the years, family and career took me from the East Coast to New Mexico, California, and Arizona. Riding remained a chance opportunity, an occasional ride on a friend’s horse or a vacation trail ride.  While living in New Mexico in the early 90s, I developed a severe and debilitating balance disorder that proved difficult to diagnose and treat. Finally attributed to nerve damage to a cranial nerve, a physical therapist suggested therapeutic horseback riding as a means of regaining and maintaining my balance. I did not have to be asked twice to start that therapy! It soon became clear that dressage was the perfect match for me, and I have been in training ever since. With the support of my husband Brian and daughter Caroline, I adopted my first horse in 1998, an OTTB who got me started on this path. Since then, I have been blessed to have owned and loved several horses who have accompanied me on this journey. In California, I trained with Carolyn Bland who early on encouraged me to be the best rider I could be, and found my heart horse, Roman Holiday, a lovely Dutch Warmblood, now gone. On “Ollie” I did my very first show at the age of 61. Carolyn also trusted me to lease and ride two of her retired FEI vaulting horses she knew would be a perfect fit for an older rider.

At the age of 70, I retired from UC Davis and we moved to Arizona. We were lucky enough to find ourselves living near Central Arizona Riding Academy and trainer Dorie Vlatten-Schmitz. I brought with me two horses, a lovely Iberian Warmblood named Miguelin, who happily found a perfect rider and new mom here, and a new horse, Prophet, an Arabian gelding. My idea of downsizing! While Prophet was recovering from a suspensory injury during this pandemic year, Dorie suggested I keep building on the progress I had been making by riding her older FEI horse Bennigan, a Swedish Warmblood she has owned for over 20 years. At 27, “Bennie” has the talent, experience, and temperament to help any rider do their best. During a lesson on Bennie one morning, we realized that we qualified for a Century Club ride and Dorie was adamant that we could and should do this. And so we did! I found riding a Century Club ride to be a very gratifying and affirming experience, and an opportunity to reflect with gratitude on the horses and people who have helped me achieve balance in every sense of the word over the years. I will continue to ride and look forward to another Century Club ride. 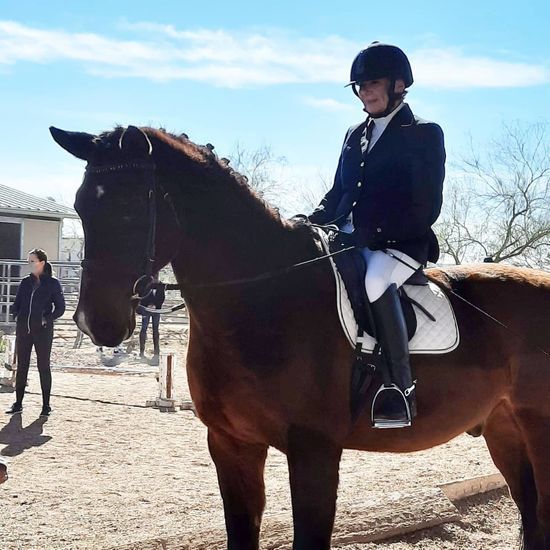