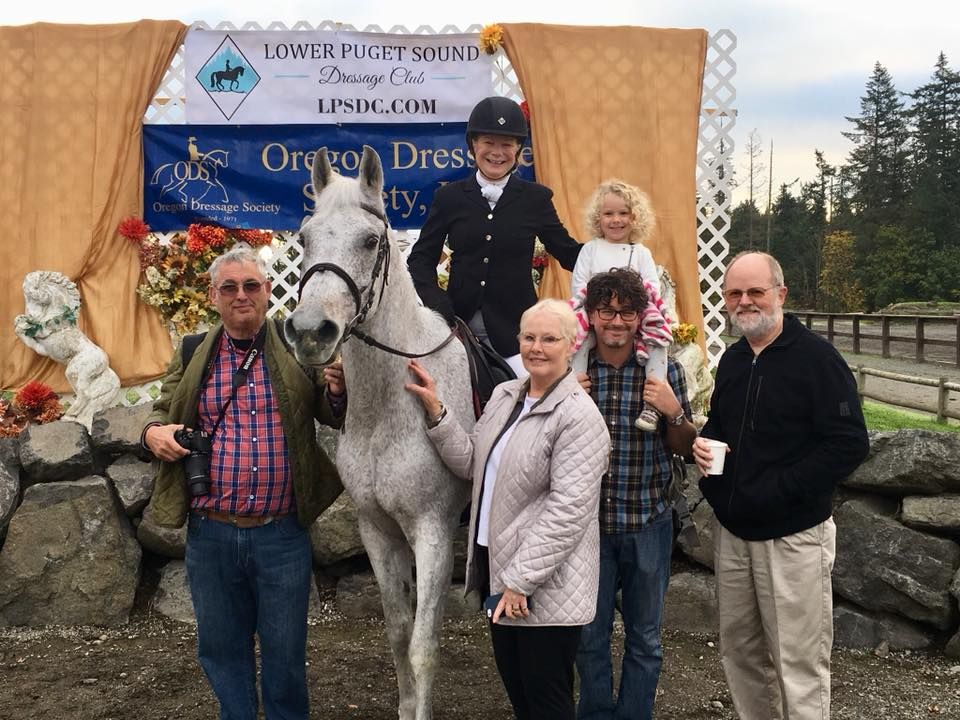 Our Century Ride was a dream come true for me and a chance to celebrate my wonderful, spirited, ageless horse! I first knew Demosthenes (Shazzy) as the bright and energetic yearling living near our home.  He belonged to a dear friend, Sue Burgoyne, and we watched him grow together.  He became mine 29 years ago.

We did hunter jumper and trail riding and I shared him with my oldest son, Ben, for competitions.  Our early rides were almost always punctuated with great gallops (with Shazzy and my Malamute dog refusing to listen to my attempts to slow down or go home).  We also enjoyed many weeks together camping and trekking. We rode the trails on glorious Joint Base Lewis McCord and fox hunted with the Woodbrook Hunt Club until he aged out of that exciting playtime.

At age 26, we retired him to dressage with Jordan Banks of Golden Horse Dressage.   It was my attempt to strengthen our communication and closeness and to keep him supple and fit.

Before his Century Ride, we last competed together in dressage in 2014. He became a schoolmaster and started many young students on their equestrian journeys. Shazzy knows how to take care of young riders and is loved by all. He loves the attention and they all have a special place in his heart.  During this time, he was half-leased to several wonderful young riders. They took him through First Level at Lower Puget Sound Dressage Club shows.

It was such a joy to feel his energy and excitement at the Century Ride. It felt like he was age 32 going on 3! We were joined in this wonderful opportunity by family, and by special friends from LPSDC and the Woodbrook Hunt Club and by Shazzy's students.  Thank you all for a fabulous show!

Shazzy, an Arabian gelding by Prince Messiah, was very well known and loved in this area. He lived a full and glorious life and would have turned 33 in 2 months...we think he had a pretty good run indeed.  We were sad to let him go due to a sudden change in his overall condition and well-being due to growth of his melanomas, which had caused him no issues for 32 years. But suddenly they were causing an issue and we in no way wanted him to suffer.

Shazzy was owned and loved by Sharon Scott for almost 30 years. She bought him as a 4-year-old and he taught her so much in that time! Sharon loved to jump and rode Shazzy fox hunting for many years and her children learned to ride on him as well. Later on in life I met Sharon and Shazzy (already over 20) and Shazzy became a schoolmaster/lesson horse teaching numerous young girls (and some older ones too!) to ride at Golden Horse Dressage. He just loved all his girls and all the attention he received and was deeply loved by so many.

Just 3 months ago, Sharon and Shazzy reached a longtime life goal of becoming a member of The Dressage Foundation's "Century Club," where the total age of the horse and rider equals or exceeds 100. They rode their Century Ride at the ODS League Finals at Donida Farm in October 2018 and Shazzy was thrilled to strut his stuff in front of judge Diane Royce and show everyone that he still had what it takes to be a show horse  He even tried to take off with Sharon in the warm-up...funny guy...he did like to do that from time to time with student's too...just to spice things up a bit and make sure no one thought of him as an old horse.

I always called him an "angel" because he truly was an angel to me and to so many girls who's lives he shaped, including most of all Sharon's.  So now Shazzy is an actual angel, indeed, and we know he will always be here in spirit with us here at Paddock Wood Farm, where he actually lived nearly 30 years ago as a youngster. Life has come full circle.  We will miss you dearly Shazzy. Your Golden Horse Dressage girls will miss you...I will miss you...and I know Xena will miss you, as you two have traveled together from Rainsong, to Green Hills, to Paddock Wood over the last 10+ years, and you were always together.  And I know Sharon will miss you the most of all as you were and forever will be her heart horse.  Namasté ~ We LOVE You 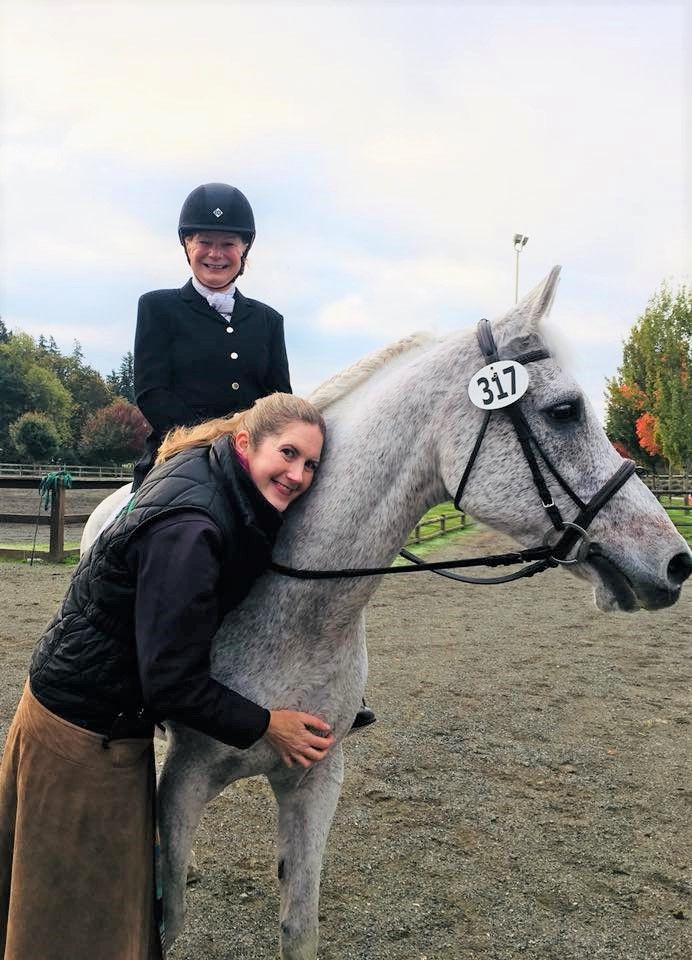