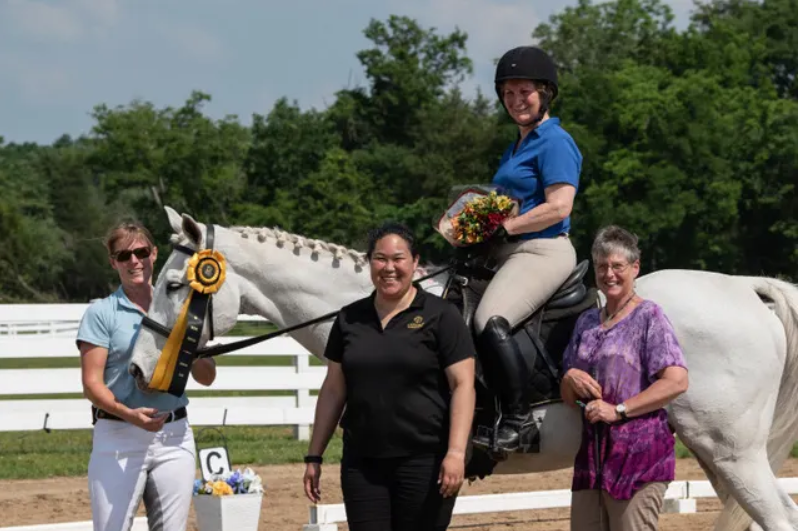 Versatile OTTB and Lifelong Equestrian Earn Century Club Membership
After a career as a racehorse, a jumper and a therapeutic riding horse, this 33-year-old Thoroughbred recently completed a Century Club ride.

by Natasha Sprengers-Levine for Event Clinics
This article was originally published in Dressage Today thanks to a partnership with Event Clinics. It is being republished here for widest possible dissemination.

For more than 20 years, The Dressage Foundation’s Century Club has proudly welcomed horse-and-rider teams whose combined age totals 100 or more. This community includes membership of varying levels, equestrian backgrounds and breeds, and even had its first Western Dressage inductee in 2012.

On Sunday, May 19, The Century Club added a new team to its roster at the Mitchell Dressage Series Show in Midland, Virginia: Susan Becker (67) and Graystone, a 33-year-old Off-the-Track-Thoroughbred (OTTB) trotted down centerline to perform Training Level Test 2 prior to a presentation of their Century Club Ribbon.

Earning 65.8 percent from “L” graduate Aviva Nebesky, the duo has much to be proud of, as do the members of the “village” who helped them achieve this goal. Becker attributes much of her confidence to Graystone’s wonderful nature and excellent training. 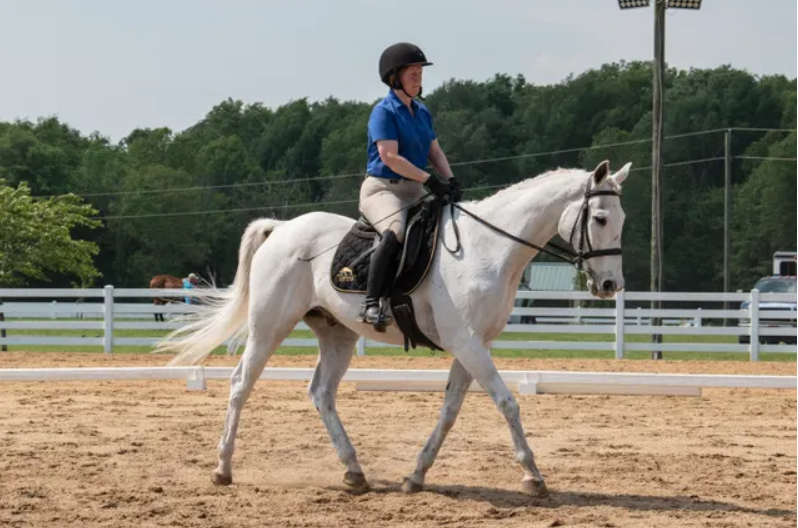 Susan Becker and Graystone on their way to 65.8 percent at Training Level Test 2. (Courtesy, Erin Berkery)

“It’s such an honor to ride this horse," Becker says of Graystone, who is owned by Jenny Spain of Firestar Farm in Catlett, Virginia. "He’s a true gentleman in every sense of the word.”

Since 2005, Graystone has been a staple of Simple Changes Therapeutic Riding Program, which Spain co-founded. Prior to that, he had four starts at the racetrack, a career in the jumpers, competed through Training Level eventing and earned accolades in the dressage ring for accomplishments through Second Level with Spain, who has owned him for 20 years.

“Initially, Graystone was a resale project," Spain explains. "I was running a summer camp during college and he kept bucking everyone off so I had to ride him. He absolutely hated the kids bouncing around on him!”

“I realized he was quite a lot of fun to jump, and really good at it. We competed in the low junior/ amateur jumper divisions up to 4’6”. While we were competing he was also a therapeutic riding horse. I would take him to a lesson and school 3’6” to 4’0” in the morning and then he would do therapeutic lessons in the afternoon.”

“He’s such a trier, I’m very lucky to have him. If they try hard, and they want to do the work, that’s my kind of horse. And Graystone is definitely that."

No stranger to equestrian endeavors, Becker is grateful to have the ride on such a patient and talented horse.

“Riding has been such a constant in my life. Being around the horses makes me so happy, riding makes me happy,” she says.

“I started riding when I was five, and took weekly lessons on saddlebred horses. Eventually I moved on to weekly hunt seat lessons, and then had the great fortune to go to riding camp in Maine for a few summers. It was so fun, but I do remember falling off quite a lot.”

Following the sale of her daughters’ horse, Becker found herself wanting to ride and spend time with horses again. She stumbled upon an ad that Spain had posted to Virginia Equestrian offering a lease on a pony named Sprout. Becker got to know Graystone, Sprout’s pasture mate, throughout her time leasing Sprout and riding with Spain.

Becker has been partnered with Graystone for about a year and a half, and says “he wouldn’t dream of bucking, rearing, bolting, or any of that nonsense some of the other horses in my life have subjected me to!”

“I really try to ride him forward and correctly. I want to do right by him and give him a good ride! I’ve learned so much from my lessons with Jenny [Spain] and Graystone. So, I really try to put it all together in the show ring,” Becker says.

Thoughtful riding and practice paid off for their Century Ride. A great score earned them first place in their Training Level class.

“The harmony in this pair is just so fun to watch," comments “L” graduate Aviva Nebesky. "When Sue struggles a little with his suspension or in her balance you can see him relax and wait for her to come back into place. And when he struggles to be forward and uphill in canter, Sue sits quietly and uses her leg to encourage without driving. It is what we want to see in dressage." 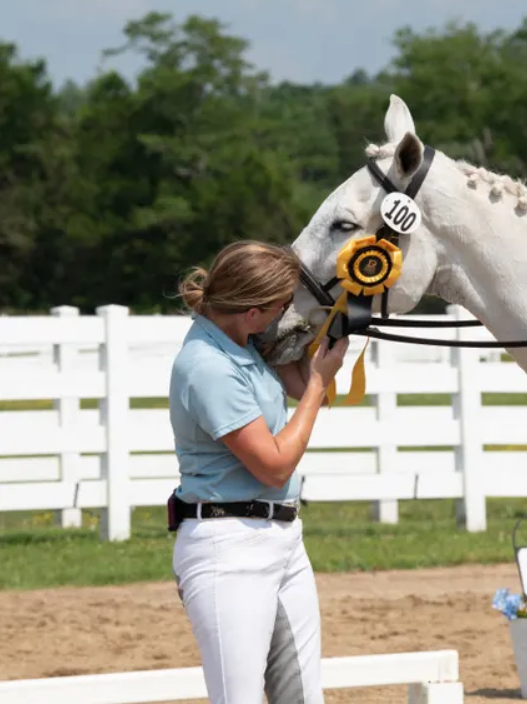 Jenny Spain and Graystone have been partners for more than 20 years. (Courtesy, Erin Berkery)

Becker adds: "It’s a privilege to learn from him.”

Graystone shows no signs of slowing down anytime soon, which is ideal given that Becker says she isn’t done enjoying her time with him.

“He’s a horse of Nine Lives,” says Spain. “He just keeps going! We do everything we can to keep him as comfortable as possible, and he does seem really happy!” 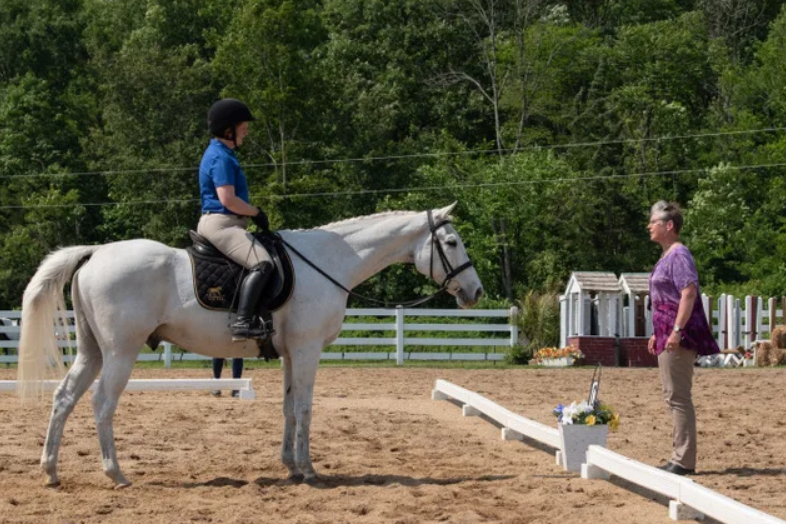 According to Jenny Johnson, Executive Director of The Dressage Foundation, the Century Club has gained popularity over the years. “In the early years of the club, only a handful of riders joined each year. But those riders (and those throughout the following years) have inspired many others and it seems to get more popular each year!” she says.

In recent years, an average of 40 horse-and-rider teams have joined the Century Club annually.

To be eligible, riders must declare intent to complete a Century Ride and apply via The Dressage Foundation’s website. Century Rides may take place at Recognized or Schooling Shows and Events.

The Mitchell Dressage Series is run and organized by Anna Mitchell, who is proud to produce a relaxed show atmosphere that caters to rookies and professionals alike. You can find upcoming dates as well as online registration at eventclinics.com.