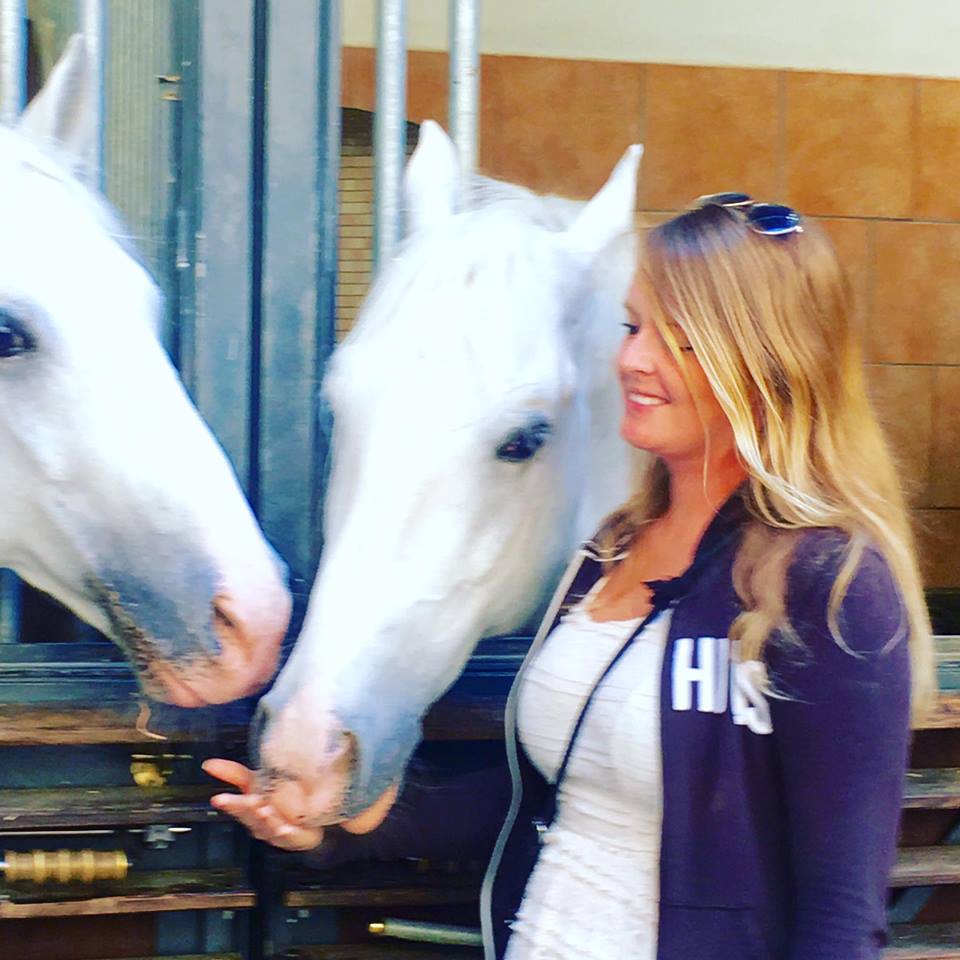 The Spanish Riding School is nothing less than the mecca of dressage, a veritable bastion of knowledge and experience regarding all aspects of horsemanship, and setting foot in the Winter Riding Hall as well as the countryside training center at Heldenberg was a bit surreal. This is a much condensed version of my week spent in Vienna courtesy of The Dressage Foundation’s E.L. Dreitzler Spanish Riding School Heldenberg Training Center Fund.

After traveling from Miami to Vienna via Amsterdam, I had a day to wander the city.  The first stop, of course, was the Spanish Riding School itself.  Tucked away into a massive fortress of classical marble encircled by horse drawn carriages and historic architecture, the school is just steps from the bustling city center and massive St. Stephen’s Cathedral.  Roman ruins and a giant golden statue of Alexander the Great’s Bucephalus highlight the front square.  The combination of history and horses quickly rocketed Vienna to the top of my list of best cities in Europe.  After meeting Anne, another of the riders attending the course through The Dressage Foundation’s generosity, we sat in the Lipizzaner Café for the week’s first prosecco and to watch the world’s second largest horse walker (recently overtaken by a larger one in Abu Dhabi) as it exercised twenty Lipizzaner stallions.

June 7 saw us to Heldenberg, past the mountains and up the rolling hillside to the farm where the young and retired horses of the Spanish Riding School spend their days.  Some of the older stallions were turned out in grassy paddocks, and the following week the 80-stall barn would be full as all of the performance stallions currently in Vienna arrived in Heldenberg for their summer vacation.  We spent two days with our guide and one of the SRS full riders, Marius, watching the younger riders and their mentors work and train the horses in hand and under saddle.   Marius outlined how each eleve, upon being accepted to the school, must train a horse through the Grand Prix before they were promoted to a full rider, and the horse they train and bring to Grand Prix to gain the title becomes special to them.  We watched a number of lunge lessons, training sessions with both green and seasoned stallions, and in-hand schooling of the airs, including the capriole, courbette, and levade.  As our viewing area was on the second floor of the indoor school, we were able to look directly down upon a stallion as it schooled the courbette in hand.  This particular horse, who was fantastically athletic, was being taught to await the command of the rider as opposed to offering the movement of his own accord.  Unprompted rears, leaps and kicks are always exciting to watch (maybe exciting isn’t the word that would be chosen by the rider holding the line), and to have a bird’s eye vantage point on the horse as he finally settled, waited for the rider’s cue, and executed the air was absolutely the most memorable moment of my time in Vienna.  The capriole was also a highlight, with its flying leap and violent kick.  Compared to the explosiveness and stunning athleticism required for the capriole and courbette, the levade may seem a bit lackluster, almost tedious.  But watching it being trained—watching how much the stallion must strain to hold himself at that coveted 30 degree angle and lower his hocks to take all of his weight onto his haunches—gives a much greater appreciation for the strength required for this air.  In truth the amount of balance, strength, and focus required of the horse is borderline mindblowing.  Just a few seconds of levade are the work of years of training and patience.

The Heldenberg Training Center also embodied a theme that runs constantly through classical dressage training: developing the natural balance and beauty of the horse.  This accentuation of the natural begins from a young age when the horses are selected to begin their training and continues through their schooling at Heldenberg.  Conformation is one aspect, personality another.  Marius constantly responded to questions regarding timeframes, talent, or training with, “that depends on the horse, but in general…” or something similar.  He stated that when they begin to teach the horses piaffe in hand, if they are naturally more inclined to kick out or rear than to sit, that is taken into account as they advance in their training.  This seems to be a key aspect in successfully training, riding, and even competing horses: finding and developing their talents, as opposed to a preconceived notion.  Another concept that stuck out for me was the 3-in-1 system for holding the reins of a double bridle.  Apparently all of the SRS’s riders are taught this way, which leaves the snaffle reins held one in each hand, while the curb reins are both held in the same hand.  The thought process behind this is to keep the pressure even, as the curb is meant to be used with a singular, evenly distributed motion by both reins, as opposed to independent pressure from each hand.  I had never seen this used, even among Olympic and internationally successful riders in the U.S. and Europe, and plan to do even more research on its origins and effectiveness.

The final day of our class was held within the Spanish Riding School itself, in the winter hall and the stables located in downtown Vienna.  The famous riding hall was simply breathtaking; a bucket list destination I could finally cross off and certainly one of the most beautiful and historic equestrian locales in the world.  We also toured the building’s backstage areas, where the horses were kept during performances as they waited their turn to go in.  We were then brought to sit under the portrait of the Charles VI, who commissioned the riding school, to watch the training session.  Every rider saluted Charles as they came in, which I thought was an interesting bit of tradition considering he had ruled over 400 years ago, in 1580.  A young stallion and rider were schooling the capriole in saddle; the horse knew when it came across the diagonal it was time, and anticipated the rider’s cues.  Again it was a lesson in patience for the horse, and timing for the rider.  It is amazing how intelligent and willing horses are, and how these traits, no doubt selectively bred into our modern horses over hundreds of years, must now themselves be managed and corrected for the horse to reach its full potential.  Another rider was on a fit, handsome stallion that was clearly taking every opportunity he could get, scooting this way and that, tossing his head and playfully kicking up his heels, while the man on his back calmly and repeatedly brought him back to attention.  The rider with us at the time (several cycled through between horses) said something to the effect of “We all school the horses and get them used to the crowds and the noise.  Today this rider drew the short straw.”

During our tour of the stables, we were also able to see the famed ‘lucky’ bay Lipizzaner, a genetic rarity found approximately in one in six hundred horses.  The recessive colors were bred nearly to extinction by the royal family, who preferred white horses, and keeping at least one bay horse in the SRS was thought to bring peace and prosperity to Austria.  As a fan of molecular biology and dressage, seeing the two bay horses they have in Vienna was a high point, topped only by the bird’s eye view of the courbette.

In our discussions and my experiences with all of the riders and horses at the SRS, I realized that the school was very unique in its vantage point on breeding mentally and physically exceptional dressage horses.  Our tour in the stables stopped at one horse, which the rider said was his to ride and train, but it had been injured and was recuperating.  He said, “I love this horse.  A brilliant mind, but his body cannot keep up.”  Another horse schooled the piaffe.  A different rider asked us what we thought was good or bad about the movement.  After fielding answers he elaborated, “Because of how he is built, if we continue to push him to perform this piaffe he will become sore, or even injure himself.  We must take care not to push him beyond his physical limits.”  He went on to say, “What we all hope for is to find is a horse with a brilliant mind and the strength to perform without injuring himself.  That is the challenge.”  I realized that the SRS in its 450 years of breeding, training, and studying the Lipizzaner, was in a way conducting an experiment: to create the perfect dressage horse.  Nowhere else in the world has dressage been so rigorously practiced and bred for, with a horse specifically developed and trained to this goal and the riders spending lifetimes in the pursuit of perfection.  But breeding, and most certainly dressage itself, is not science.  Despite all of this, perfection still remains elusive, and instead the focus becomes bringing out the best in each individual horse, as opposed to creating an army of identically performing super horses.  It must be heartbreaking to accept that a horse is not strong enough or not mentally capable to reach the highest level of training, despite having all the talent in the world.  Even among the upper echelons of dressage sport, many a rider has had to come to grips with this reality.  But the SRS and its consistent work is a testament to dressage’s focus: that is, training the horse and perfecting the partnership between horse and rider.  And once in a while, a horse will have both the mind and the body, and will be paired with the right rider, so as to come as close to that perfection the art strives for.   In the end it is a reminder to all everyone who swings into a dressage saddle: nothing can be perfect, but listen to your horse and try anyway.

If equestrian inspiration is what you’re after, look no further than the white marble and snow white (except for the bays) horses of Vienna.  It’s incredible to imagine 450 years of dressage tradition, stoically maintained through the rise and fall of power in Europe, including all out war, to continue today in that classical riding hall: a work of art that frames the living works of art.  The lifestyle of the riders is idyllic in that they are surrounded by beauty, history and like minded colleagues, as well as the best Lipizzaners in the world.  Seeing the horses, the history, and the tradition of Vienna was a reminder of what dressage really stands for, how far it has come, and why we, as riders, continue to strive for that perfect partnership.

For anyone who is planning to attend the SRS’s training programs, I highly recommend reading the pointers outlined at the end of Anne Zahradnik’s (my fellow Training Center Fund recipient) write up.  She eloquently walks you through the pros and cons of Uber, traveling to Heldenberg, and a number of other pointers we learned during our trip! 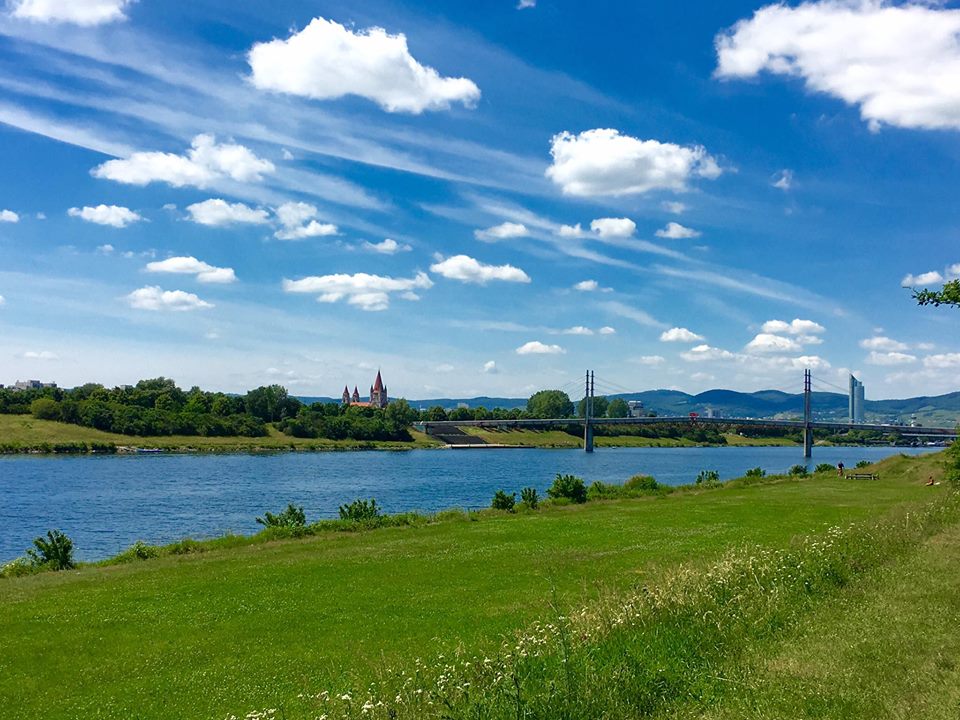 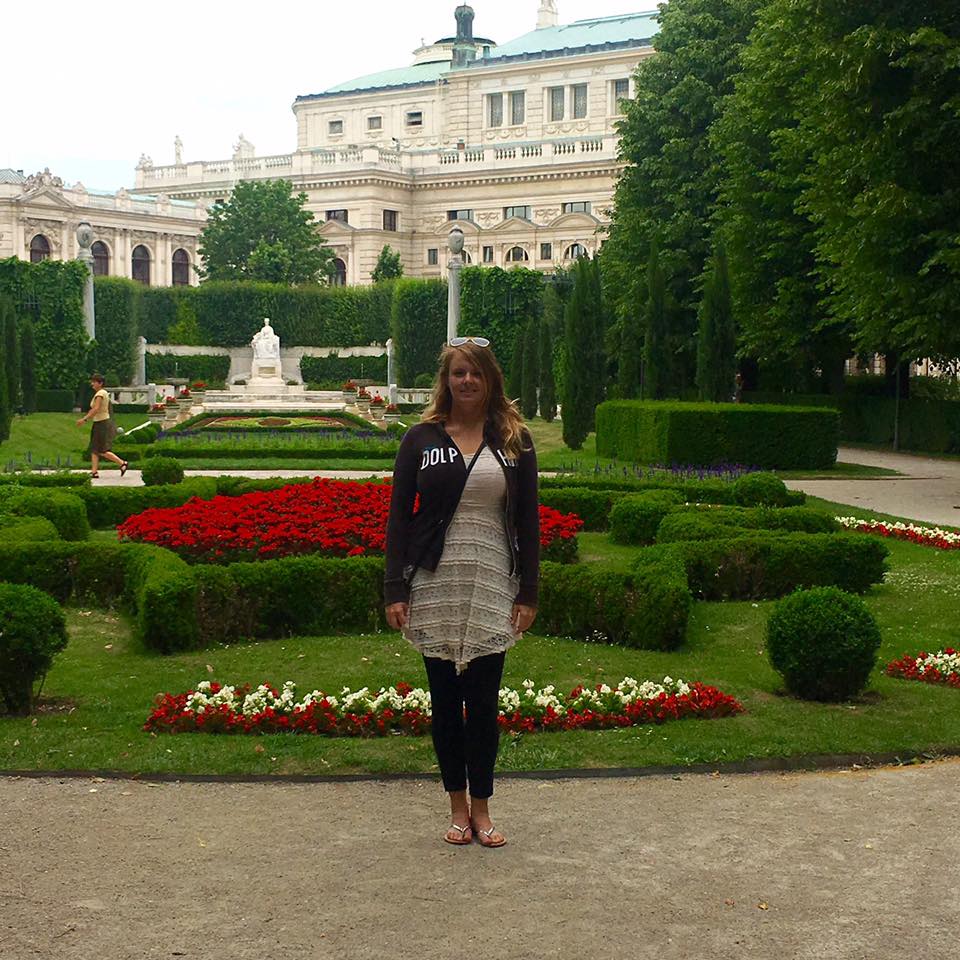 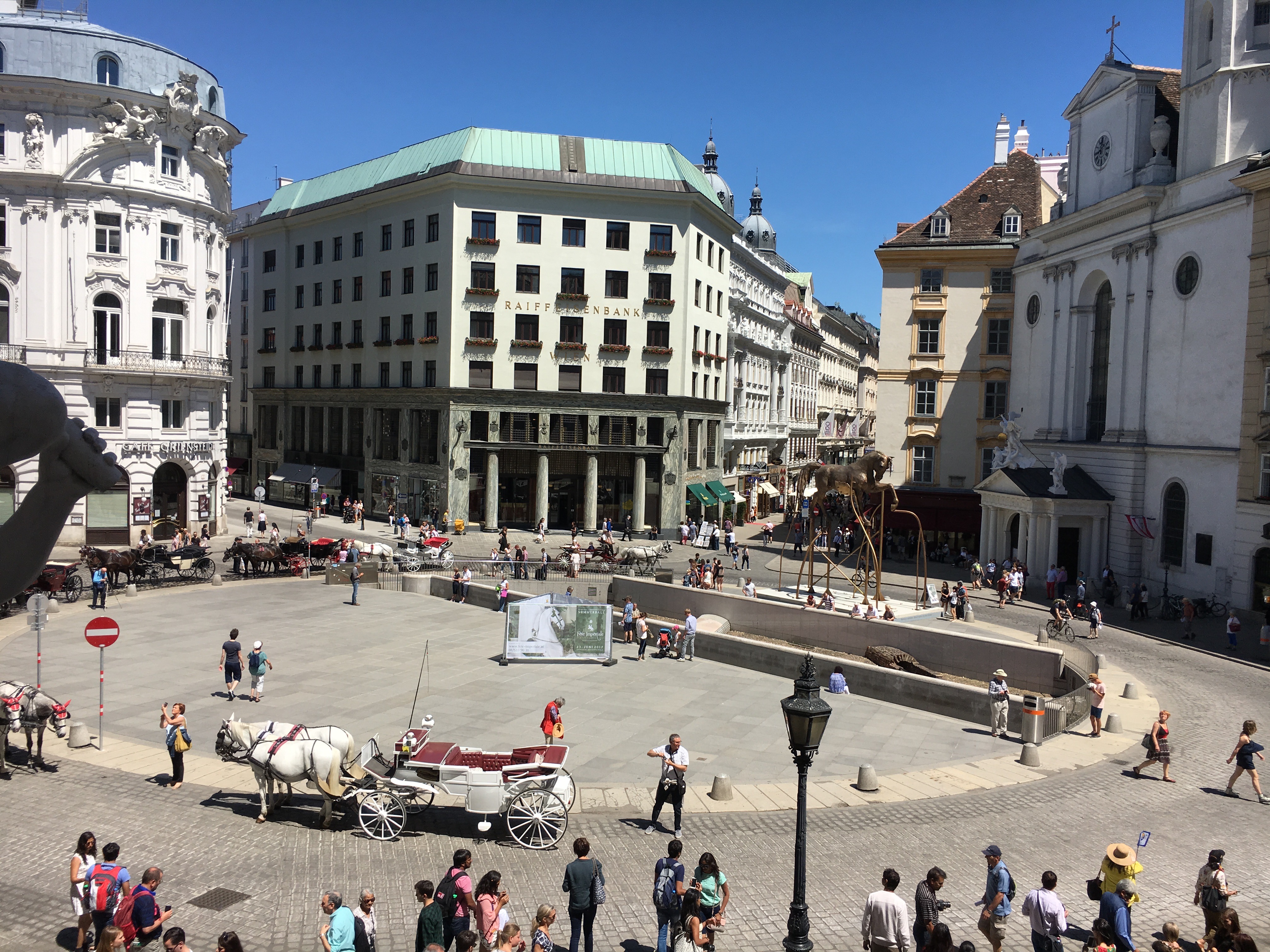 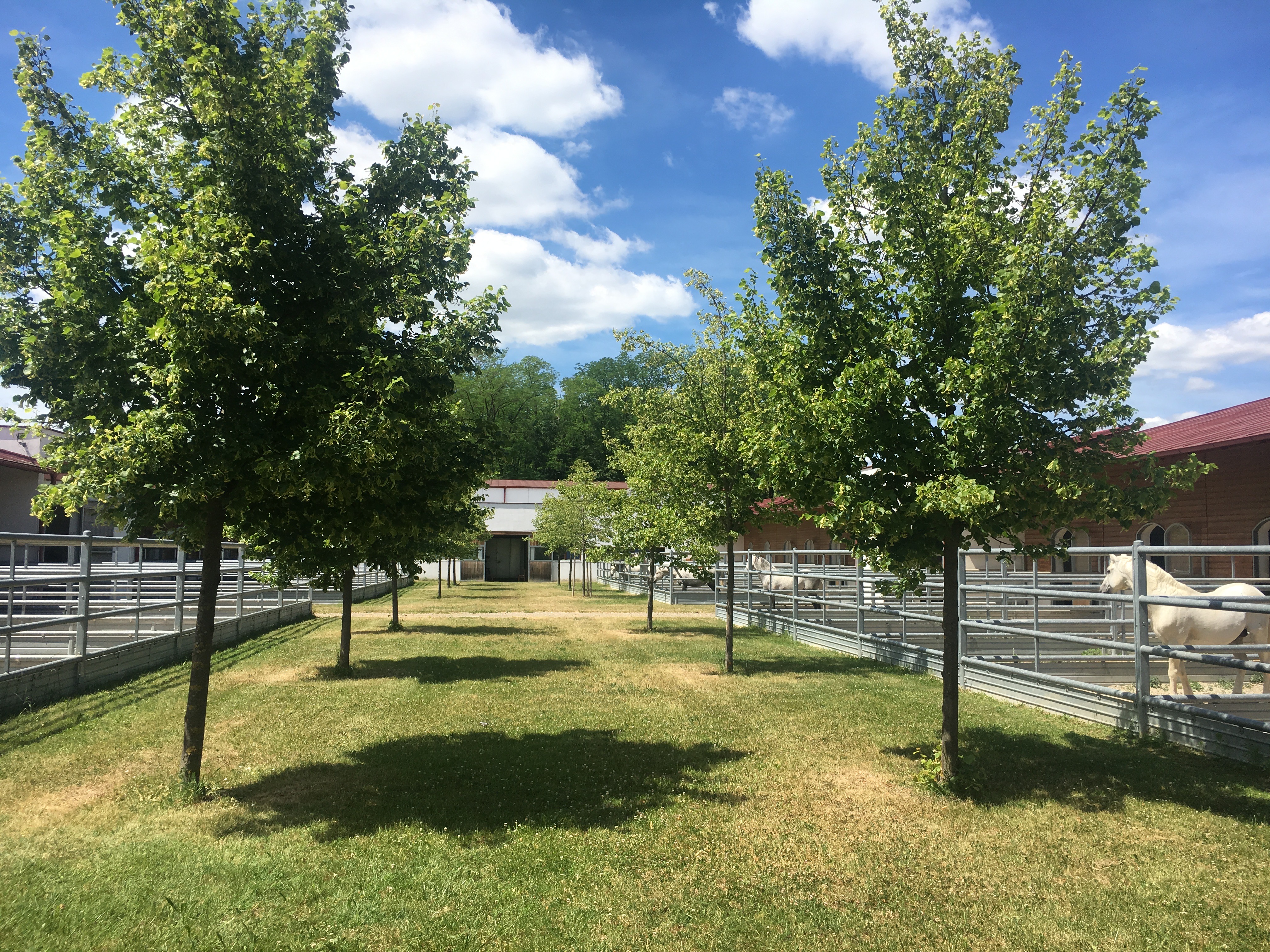 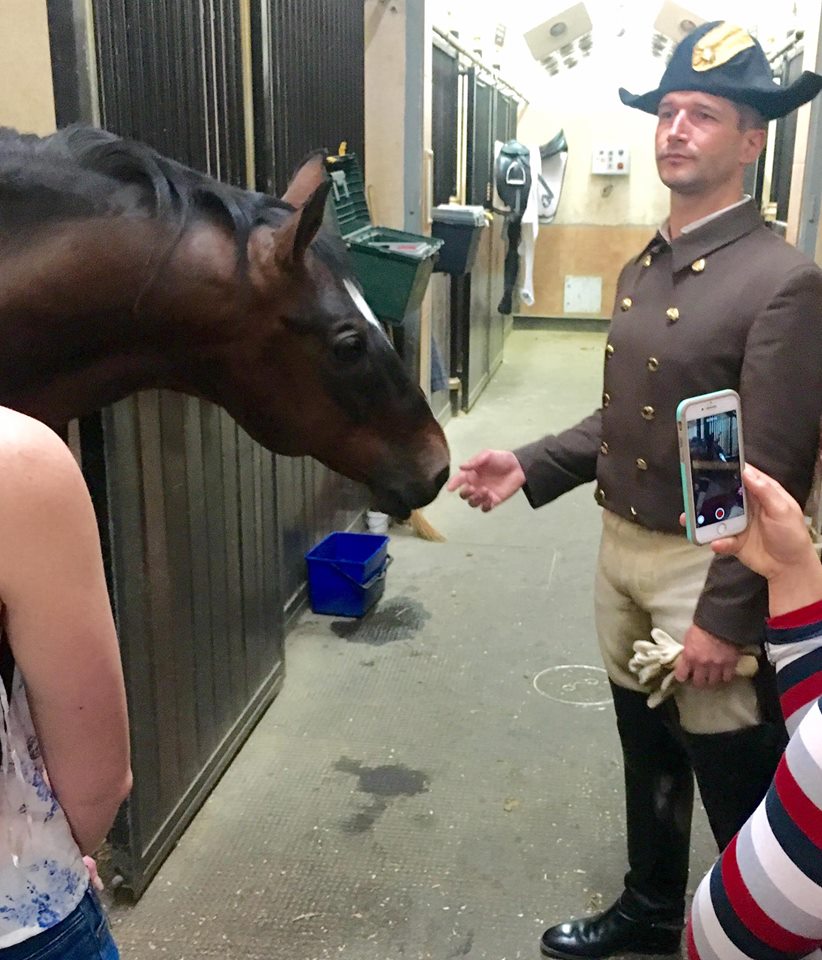 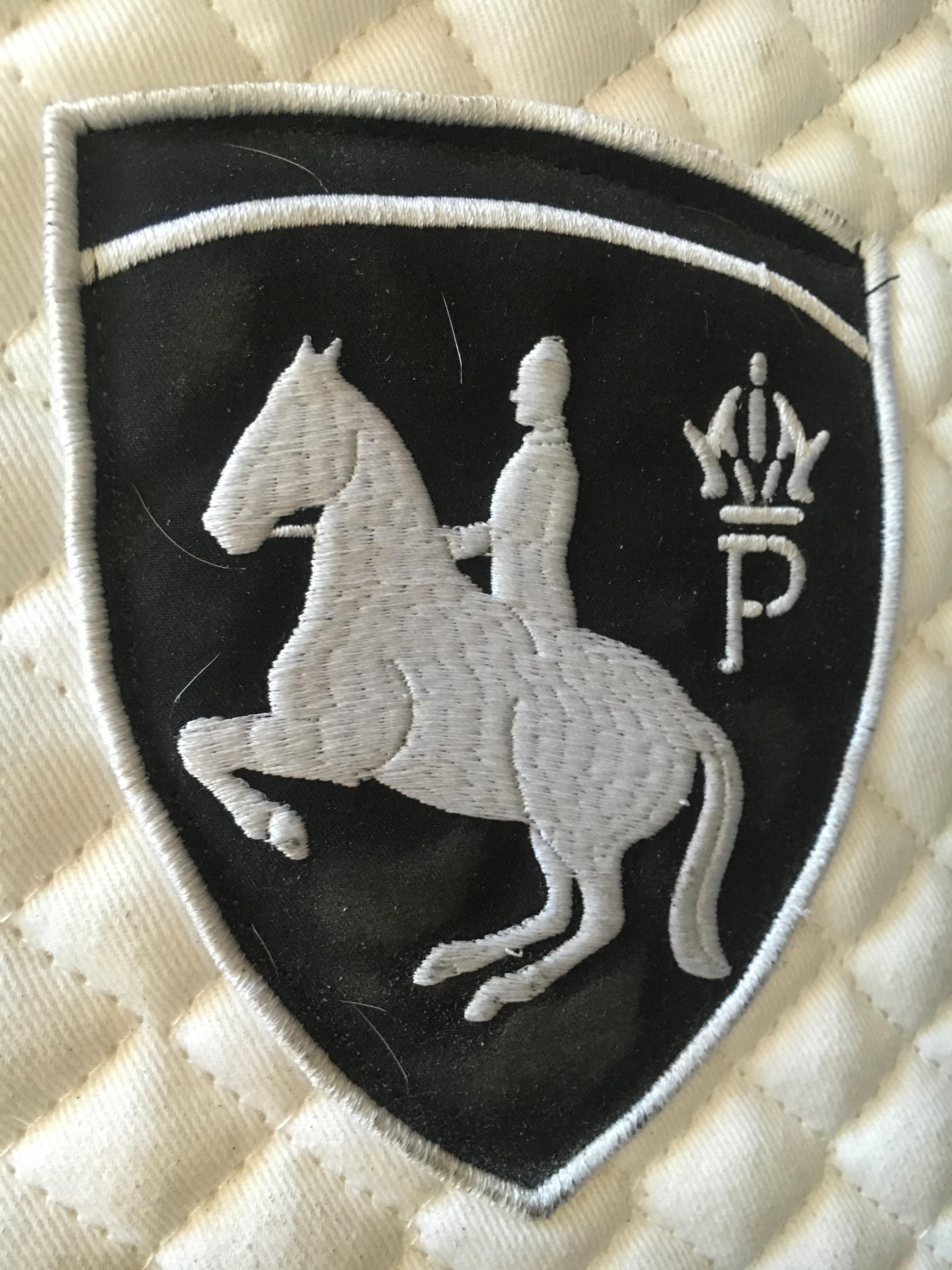 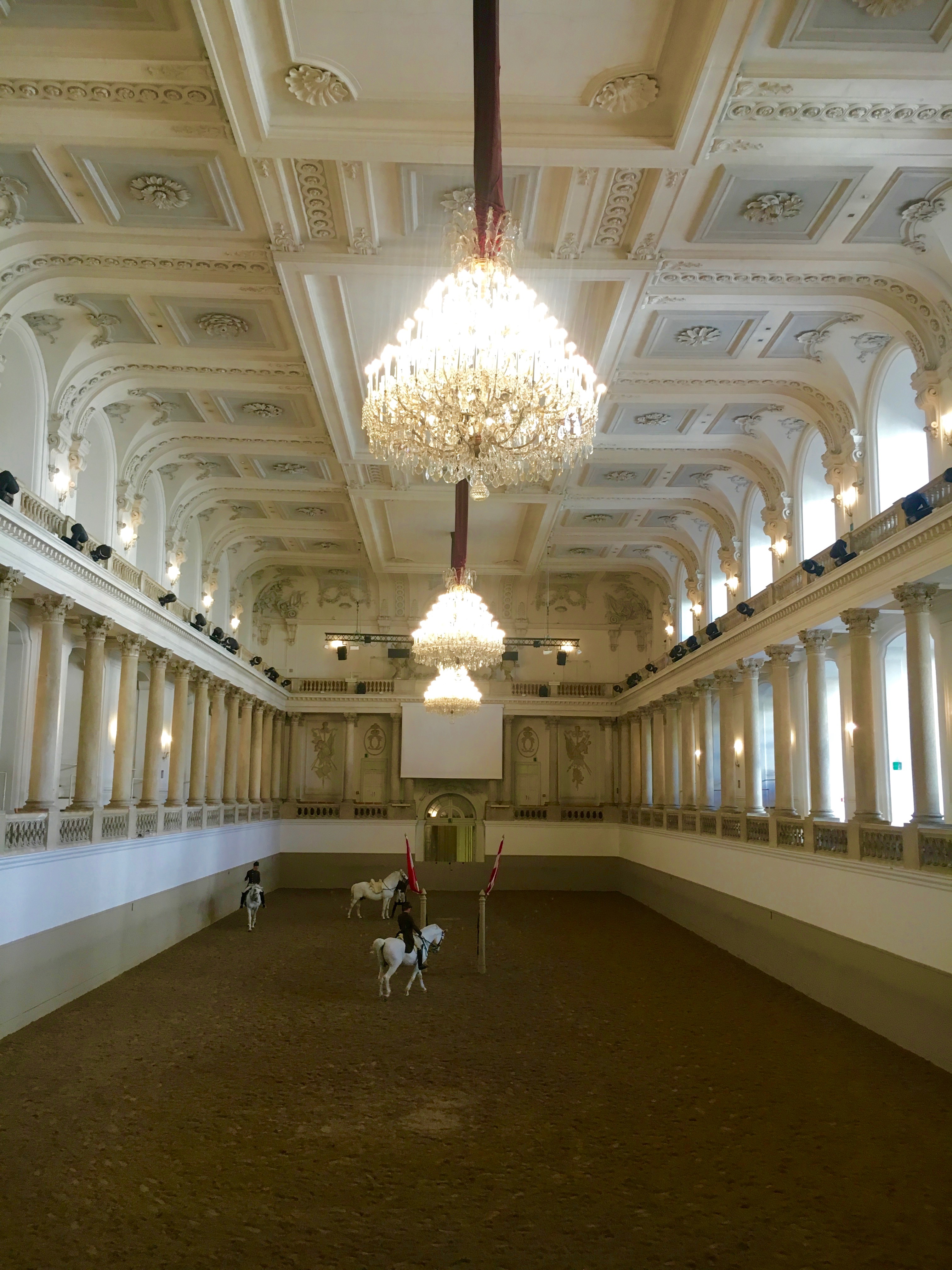 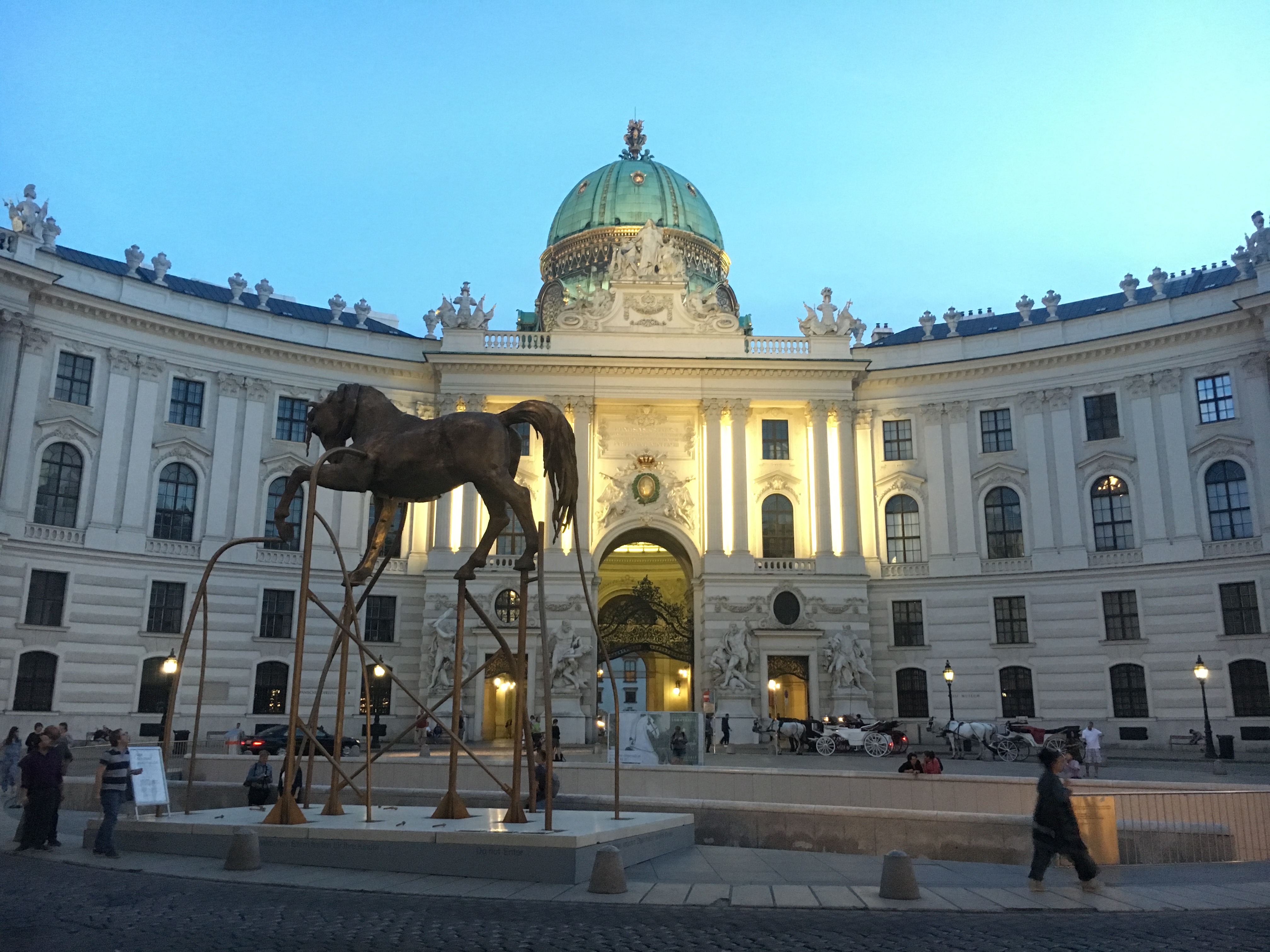 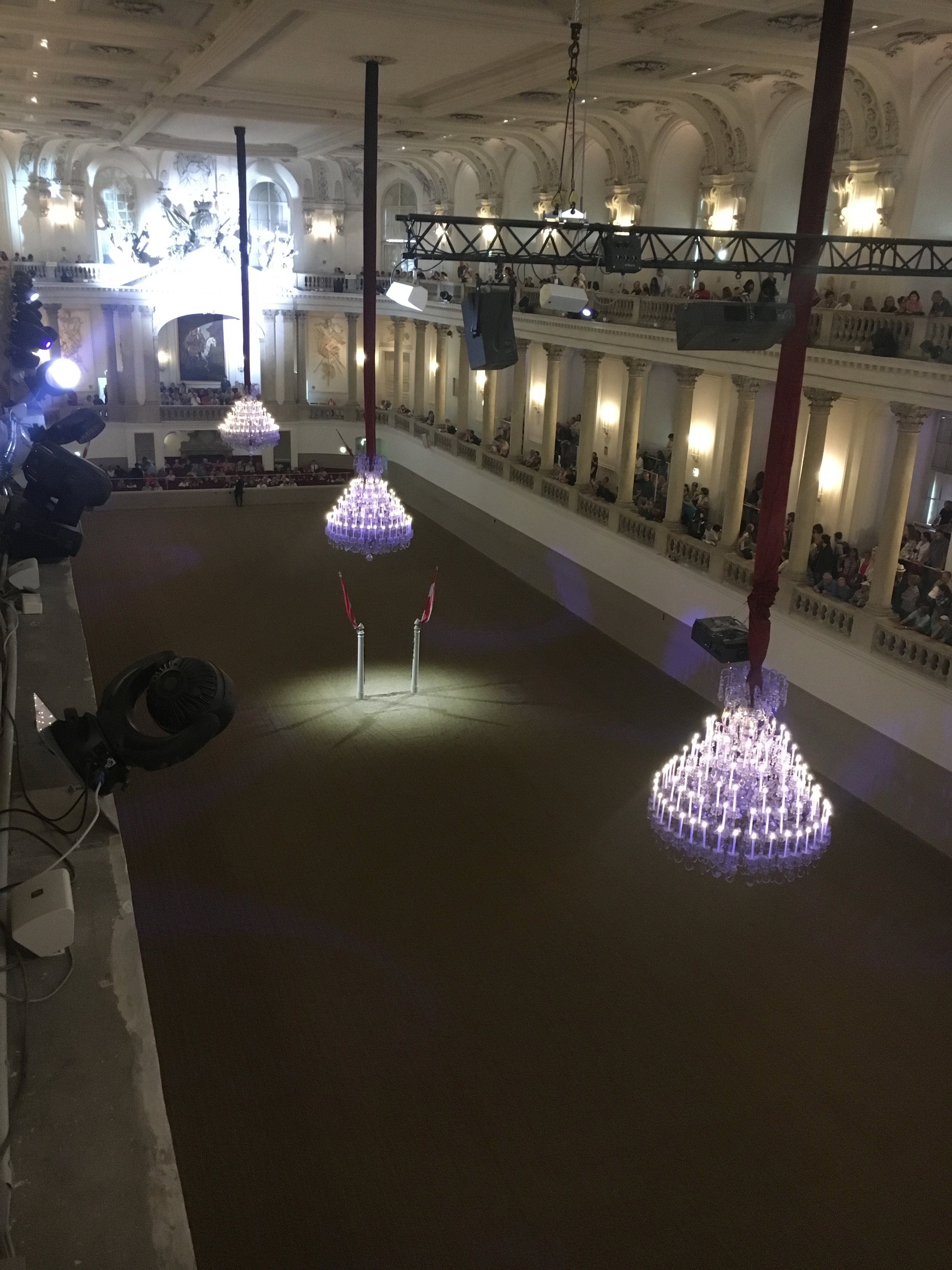 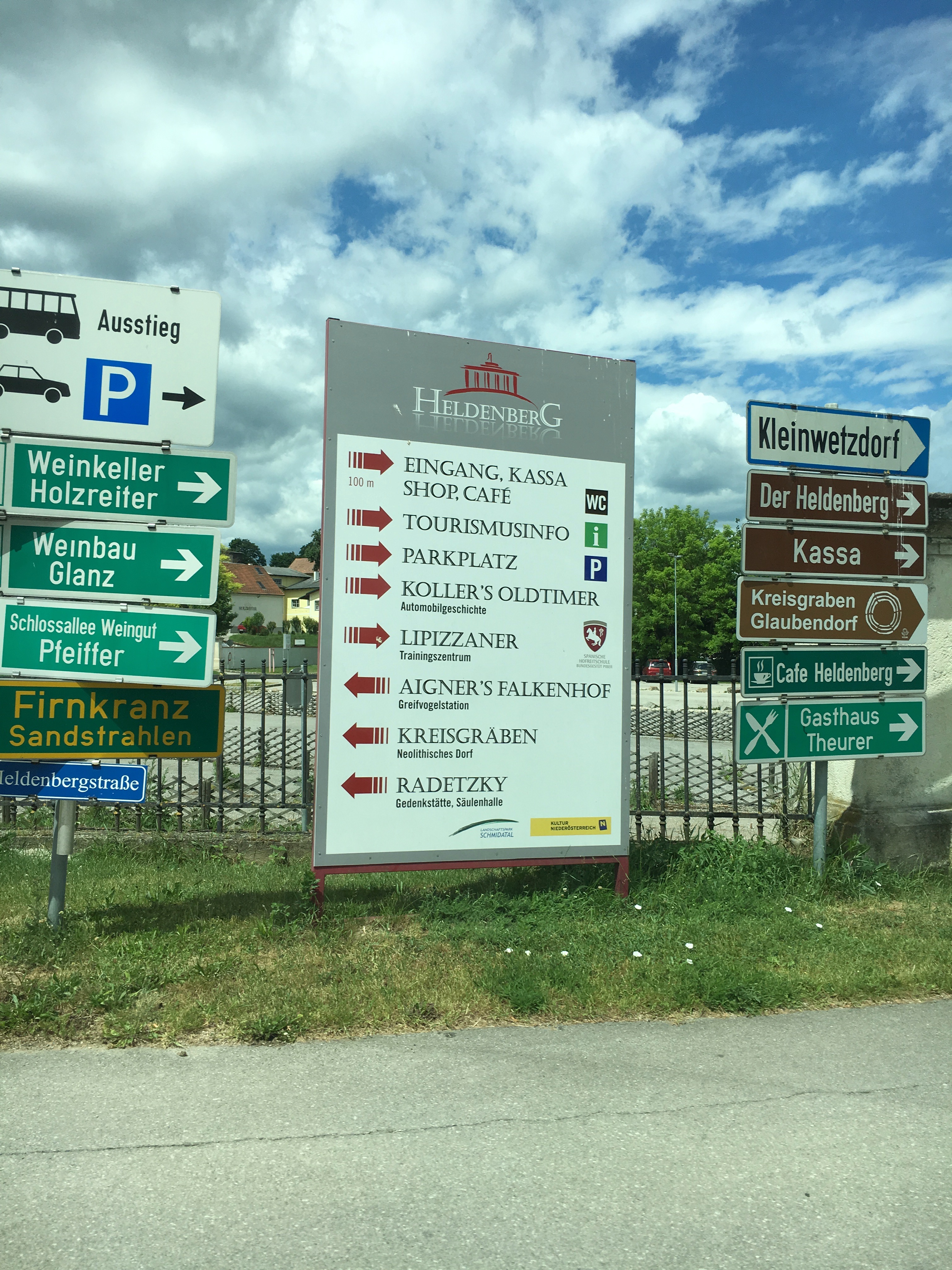 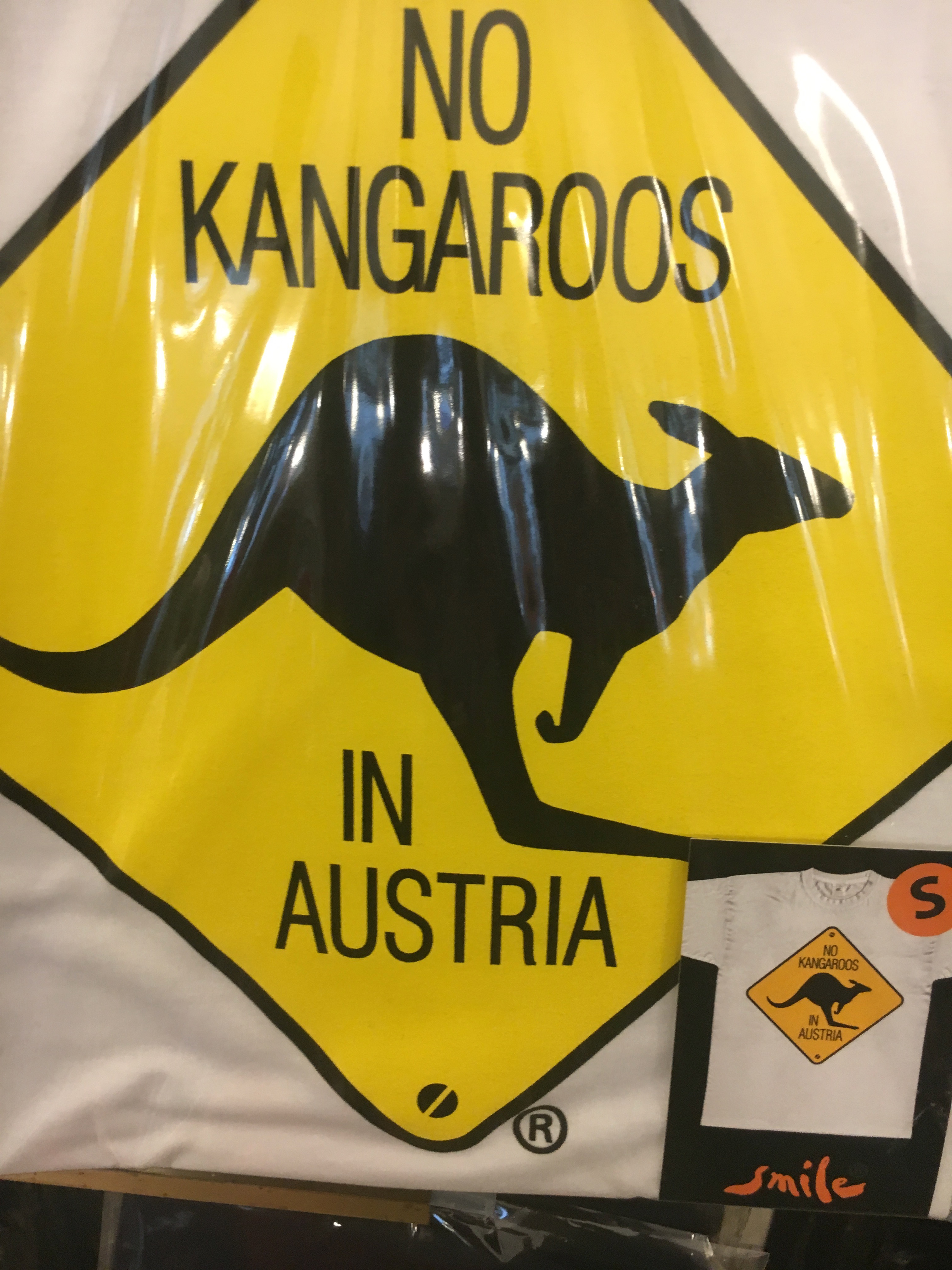