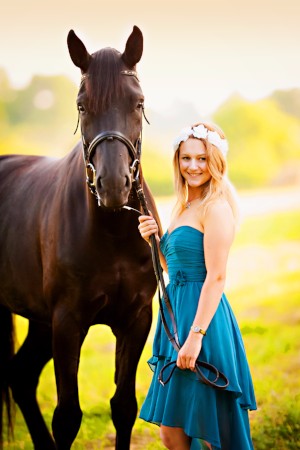 During my time at the Spanish Riding School I was absolutely amazed at the level of the horses and the ability of the riders. I can easily say that it was one of the most amazing experiences of my entire life. On June 5th, I boarded my first flight which was headed for Newark, NJ. While the flight itself was rather uneventful, I was filled with a nervous excitement. After a five hour layover, it was time to board my second flight. Eight hours and three movies later, I was standing in Vienna, Austria at 7 AM on Tuesday, the 6th. I retrieved my bags and found the rental car facility. My morning was spent driving around Vienna, lost, as I didn’t fully know how to work the GPS in the car. Lost, however, is really a relative term. While it took me awhile to find where I was going, I got to see a large part of the city while I was getting there. That in itself was worth the journey. After finding my hotel and dropping off my bags, I decided to explore some of the castles in the area surrounding Vienna. I drove to several castles, one of which was just ruins. Exploring took the rest of the afternoon then I headed into town for some food.

The next morning, June 7th, was the first day of the theoretical course. Unsure of how traffic would be, I got up at 6 AM and left by 6:30. At 7:30, I was standing at the Heldenberg Center, unsure of what to do until our 9:00 start! I tried finding someone to tell me where to go, but I was there before anyone in the Visitor’s Center had come to work. After about 20 minutes, a lady came and pointed me in the right direction. I pulled around to the barns and was greeted by one of the stallions in his paddock. Even though I arrived far too early, it was relaxing to walk around a little bit and talk to the stallions.

In all, there were about 15 people in the course, most of them being from a Lipizzaner Riding School in South Africa. I was excited to finally meet Anne and Holly, the other two women who had also come from the U.S. and received the Heldenberg Training Center Fund Grant. Our instructor, Marius Schreiner, greeted all of us outside of the barns before leading us to the indoor arena. He was exceptionally friendly and answered all of our endless questions. We were truly fortunate to have him as our instructor. We all sat in a seating area which looked down into the arena. From there we watched the riders give us demonstrations of various aspects of training. I was particularly interested in the training they do with the piaffe.

I have always associated piaffe as being an upper-level movement in the world of dressage. These horses, however, learn to piaffe before they are even ridden! Piaffe is used at the Spanish Riding School as a way to help the horse build muscle and balance. All of the horses that we saw were about five years of age and had been under saddle for only a few months. Despite the “greenness” of the horses, every single one of them was able to piaffe in-hand. Some had even been started in piaffe under saddle. It was absolutely fascinating to watch. They also showed us how they started horses under-saddle by leading them in-hand with a rider on them. I found that the Spanish Riding School actually uses a lot of in-hand work to assist in their training. For me personally, this was not an entirely alien concept, but not a particularly familiar one. I had no idea just how much one could accomplish with the in-hand training.

We stopped half-way through the morning for some snacks and refreshments, and again at noon for some lunch. The rider who was instructing the rides, Jochen Rothleitner, came and joined us for our break. I was glad to have the opportunity to talk to him as well as Marius. The program only went until noon, so we packed up our things to go at that point in time. Marius led us all back to our cars, answering questions along the way. We all said our goodbyes and headed out. I drove Holly and Anne to their hotel before driving out to Schönbrunn Palace to see the home of the former Austrian Monarchy. It is far enough out of the city to be out of walking distance, but is well worth the drive. It is an absolutely enormous castle, filled with beautiful artwork and tapestries. The decoration of the ceilings and walls themselves are fantastic, as they are filled with frescos and bright colors. Behind the palace are the gardens, which are large enough that there is an entire zoo within them. I went inside of the zoo and was greeted with animals of all kinds. I spent the entire afternoon at the palace and walking around the gardens before heading back into town for dinner.

On Thursday the 8th, I once again headed out to the Heldenberg Training Center. This time, I stopped to pick up Anne and Holly along the way. We had a lovely time chatting on the way out to the Training Center, arriving at about 8:15. Once again, Marius greeted all of us and took us to the indoor arena. We watched some more of the morning exercises and were shown some of the in-hand work with the levade and the capriole. Marius made the comment that, “Most problems with a horse can be fixed by going more forward.” It made me smile to know that some things in the horse world are entirely universal. After watching the morning rides, we left the arena and went to the barns to visit with the horses. Hannah Zeitlhofer was standing outside of the barn grazing two stallions. I took the opportunity to go and introduce myself to her. She was very sweet to talk to. I was truly honored to meet the first woman to become a rider of the Spanish Riding School.

After touring the barns, we once again said our goodbyes to Marius. We were able to chat with them a little bit after the end of the program, at which point Jochen invited us to come to his barn and see his horses. Anne, Holly and I all jumped into the car and happily drove to see his horses and watch him ride. The facility we went to had barns for several trainers and their horses. There was a restaurant there as well which had huge viewing windows so that one could look in at the rides in the two indoor arenas while having a meal. Anne and Holly had purchased tickets to a concert, so they took a train back into the city. Jochen and I went to a different training facility and toured around it. It was the largest training facility in Austria, housing over 1,400 horses at any given point in time. I also got the opportunity to meet another one of the riders while I was there. I said my goodbyes to Jochen and drove into the city to return the car. After returning the car, I went to a ballet and watched Swan Lake. After the ballet, I found some dinner and returned to the hotel.

The final morning of my adventure, I got up early once again and headed out the door. I took the train over to the Spanish Riding School, arriving at 8 am. The city was still fairly quiet at that hour of the morning. There weren’t a lot of tourists in the area yet, so it made for some nice pictures of the building itself. The Spanish Riding School is an enormous building which has elaborate decorations carved into the outside of it. Our guide for this day was Helmut Oberhauser. He took us all around the entire facility, including through the stables and the tack rooms. He opened the gate of the arena so that we could look inside and see it all from the ground.

After touring the facility, we sat in the seats at the head of the arena and watched the morning exercise. This part of the experience was particularly interesting because the riders traded out talking to us. I enjoyed that because it gave us the opportunity to meet more of the riders. I was particularly glad to meet Herwig Radnetter. Herwig was explaining to me that he comes to the USA to teach clinics quite frequently. He told me that in fact, he would be teaching in Indiana in July. I commented that it wasn’t that far away from my house and he promptly invited me to come and ride with him in his clinic. I was honored at the offer and immediately accepted. I really couldn’t believe that I had been so fortunate.

Our program ended with us being led into a room which looked out over the square which the Spanish Riding School is situated on. We were all given champagne and toasted the experience. We were also joined by the Chief Rider of the Spanish Riding School. The entire group was presented with certificates of participation with our names on them. In a moment of comic relief, they put my name on the certificate backwards. I found the situation to be quite funny and had a good laugh about it. They took down my address and sent me a new one. I think, however, that I’ll frame them both. Sometimes it’s the little things like that which make for the best memories.

My Notes From The Spanish Riding School:

Day One at The Heldenberg Training Center 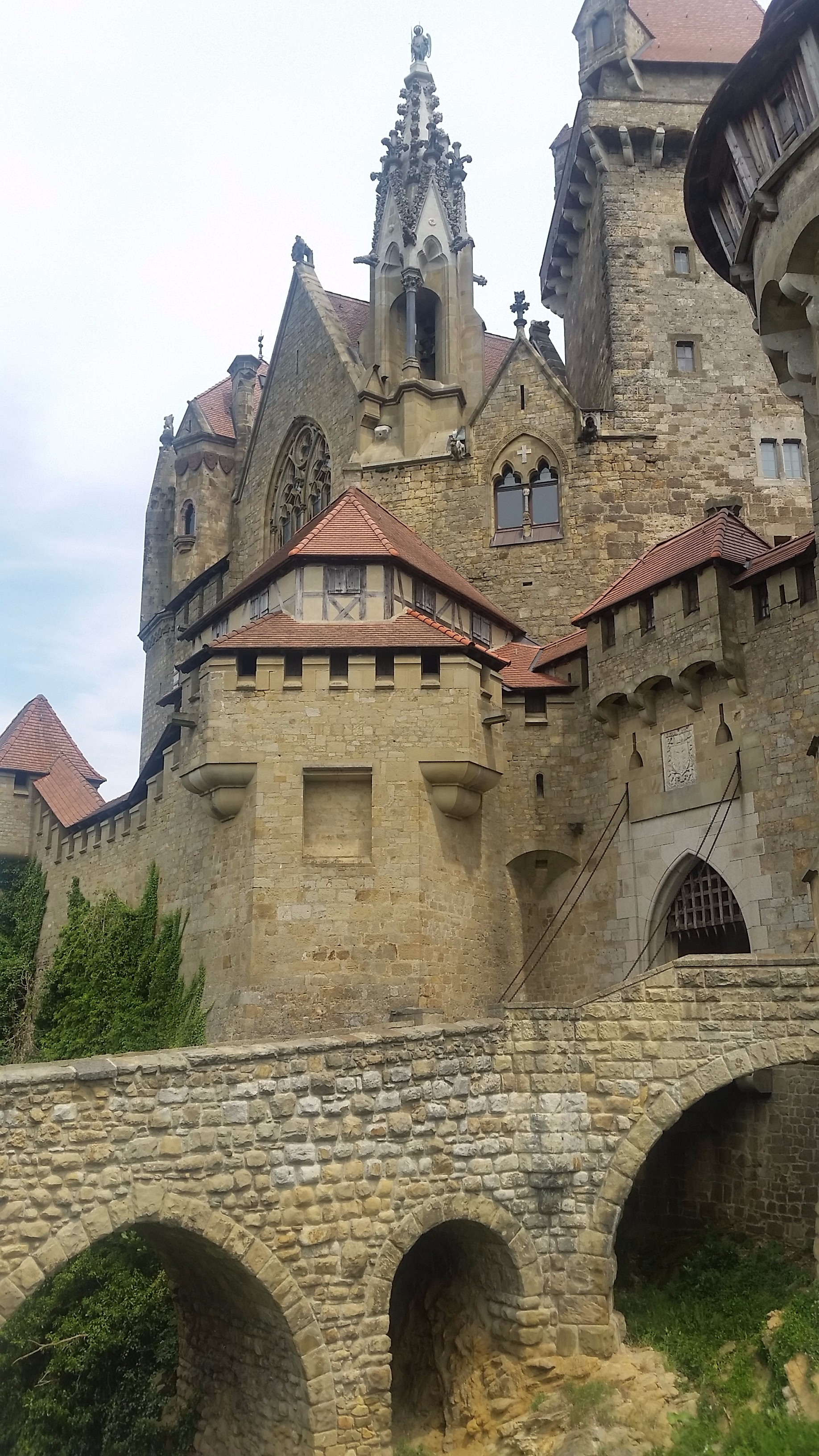 One of the castles surrounding Vienna 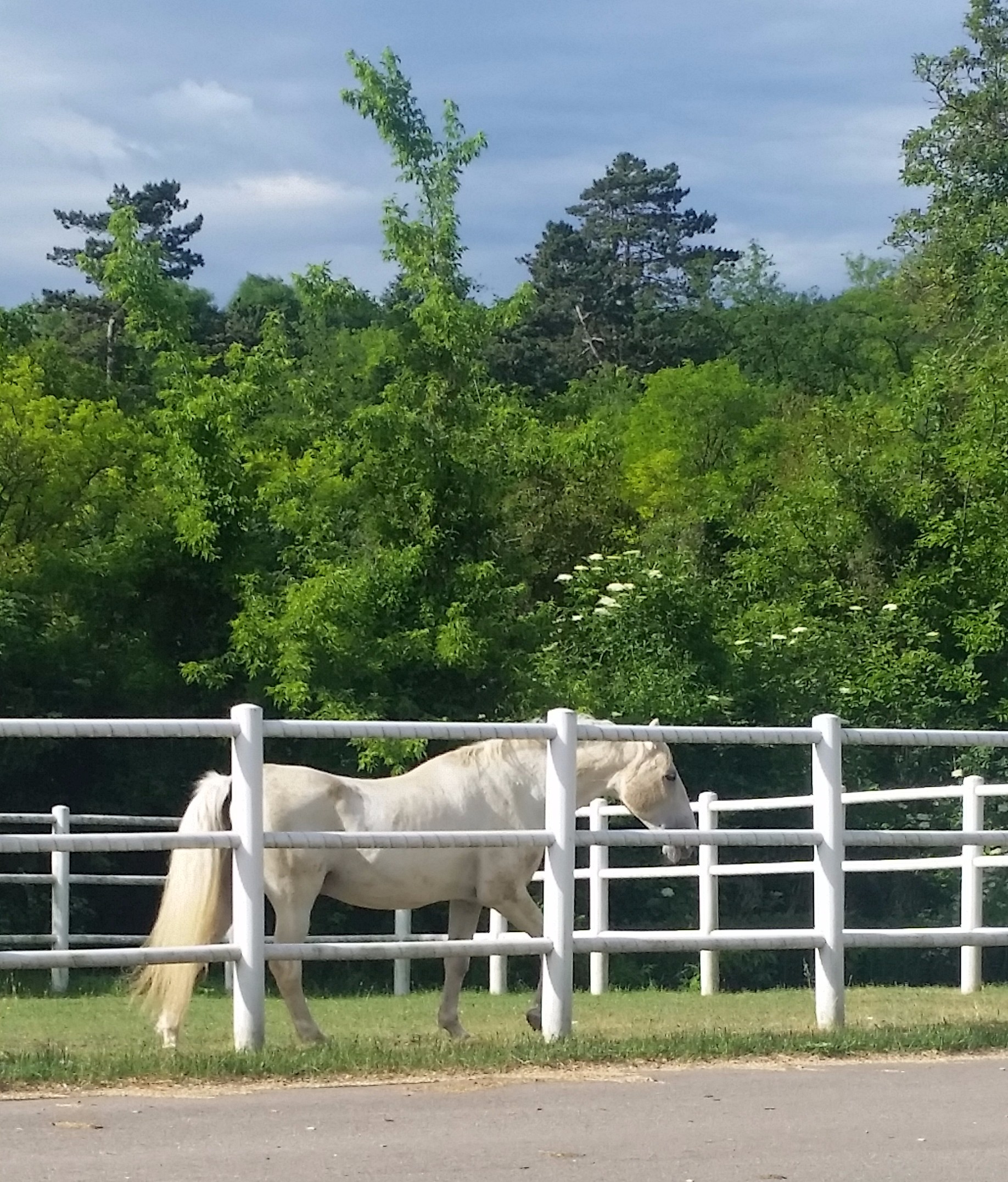 One of the stallions in his paddock.

The Schönbrunn Palace, home of the former Austrian Monarchy. 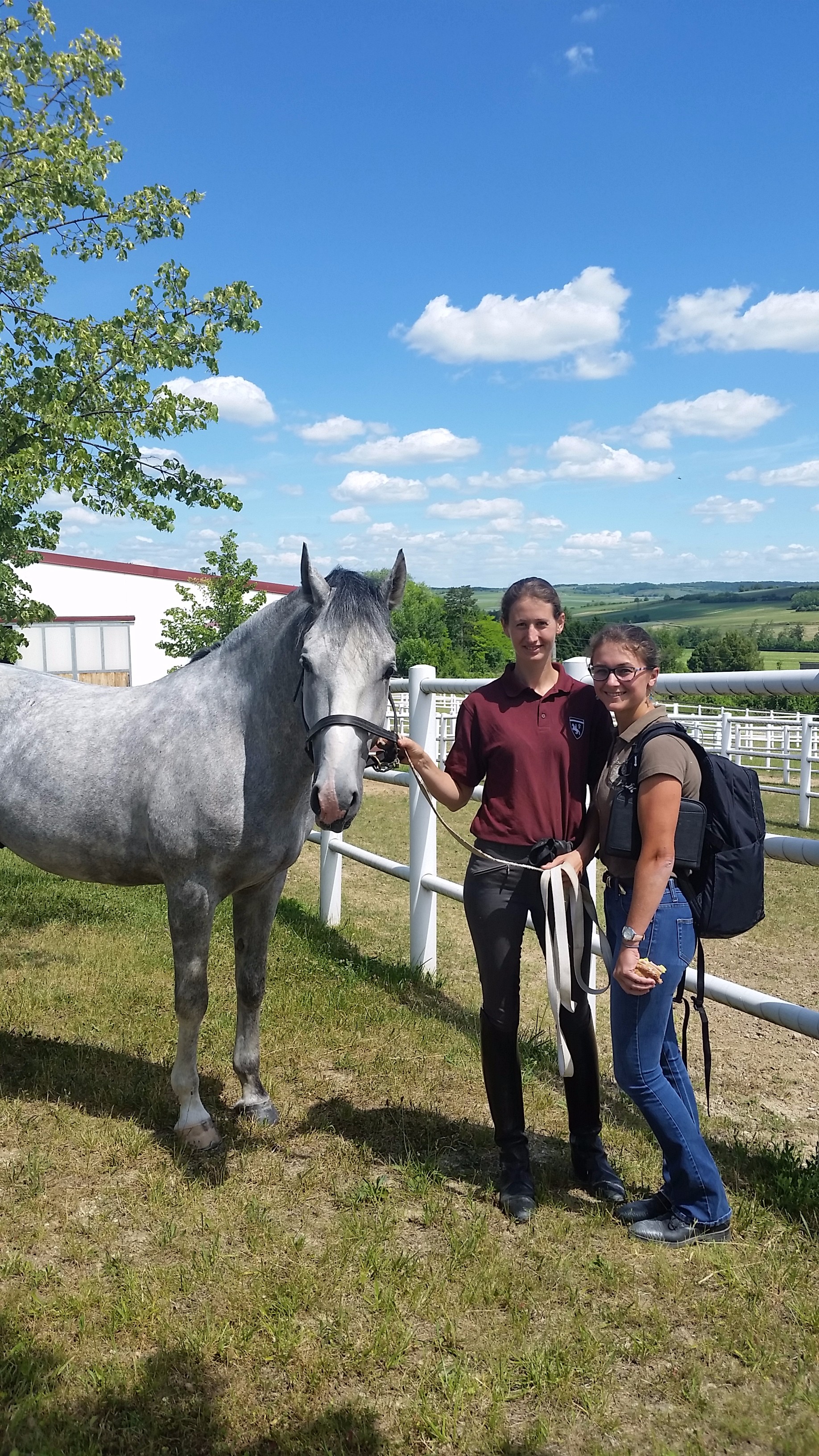 Saxon with Hannah Zeitlhofer, the first woman to become a rider of the Spanish Riding School. 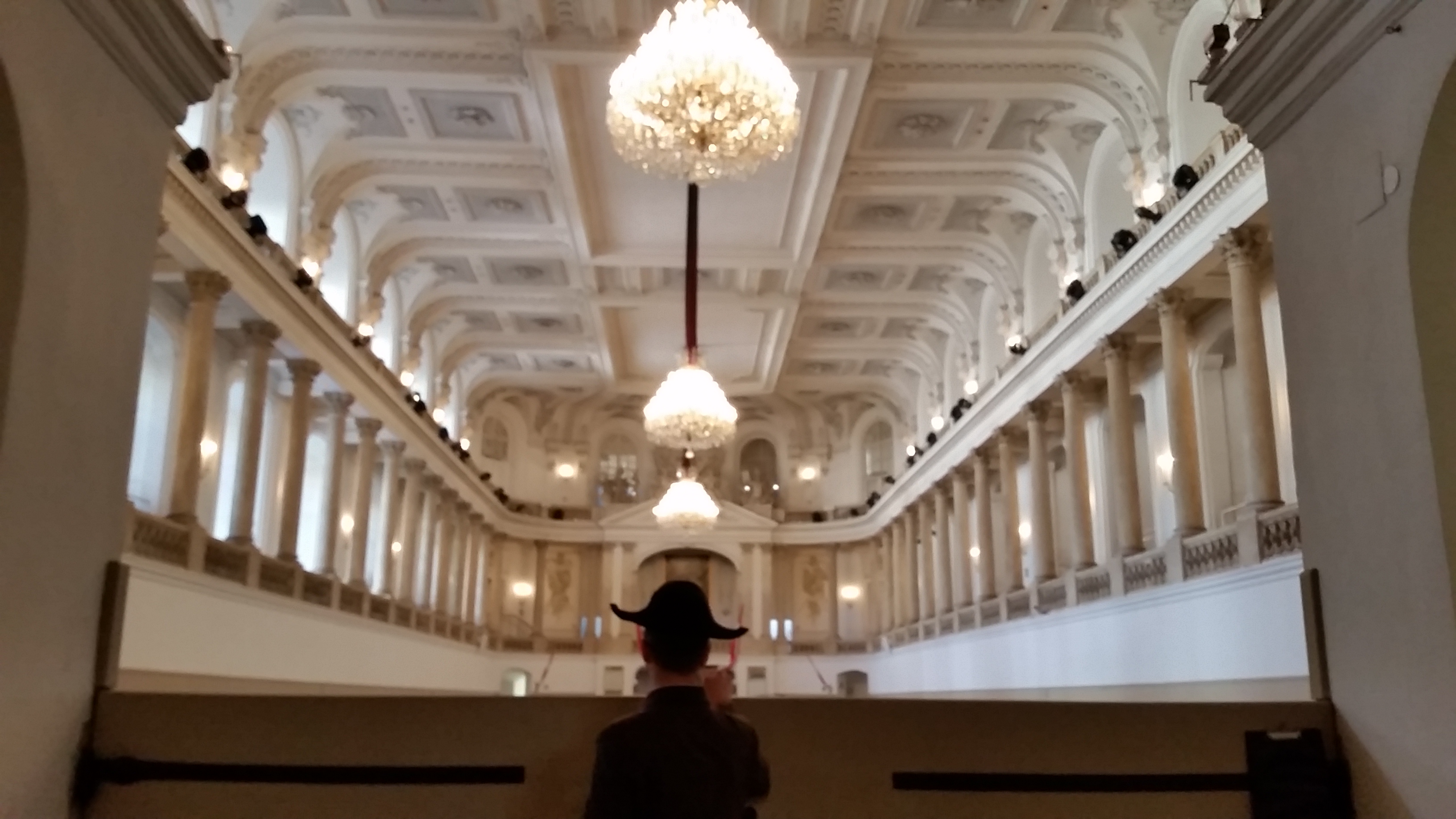 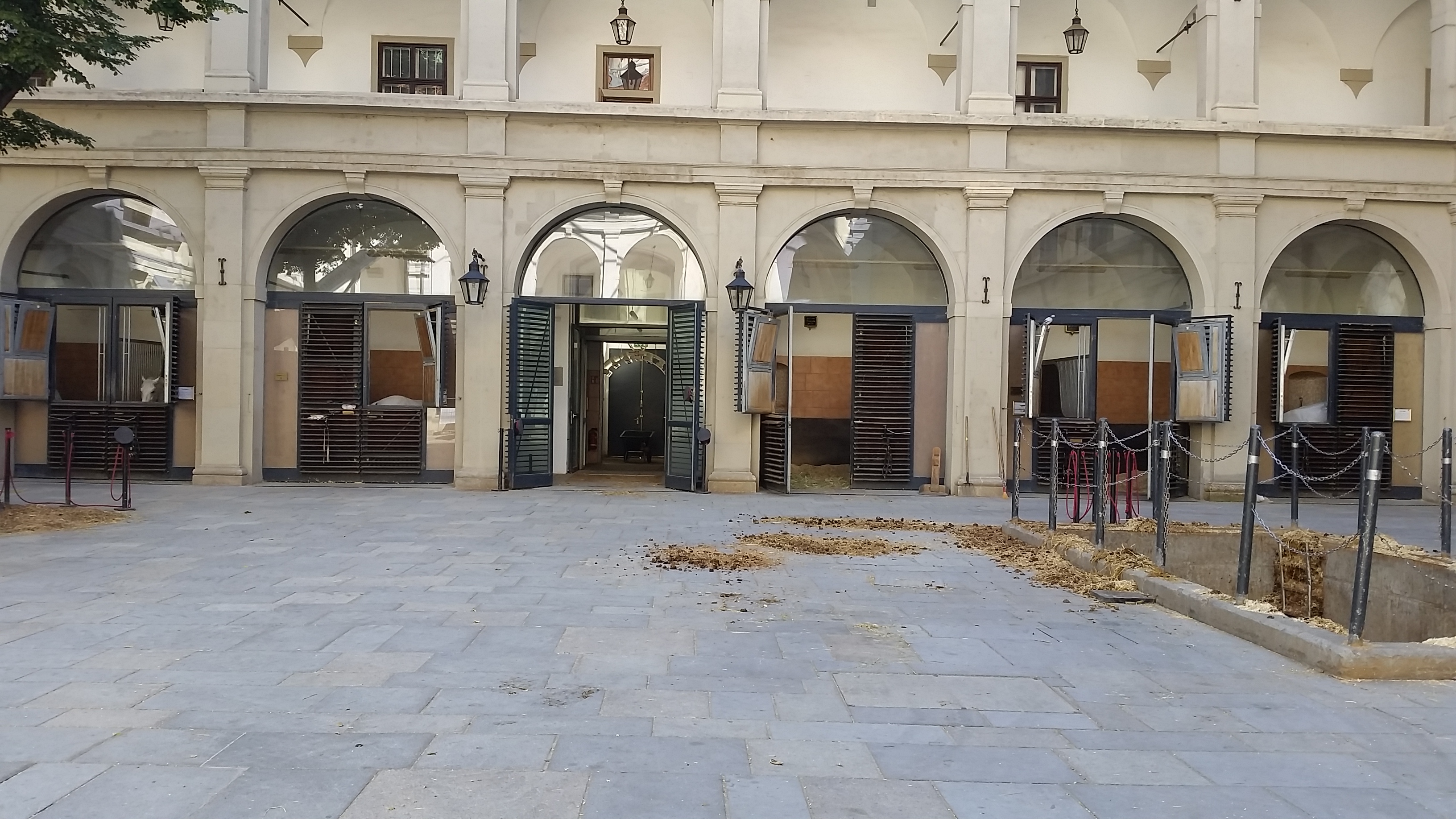 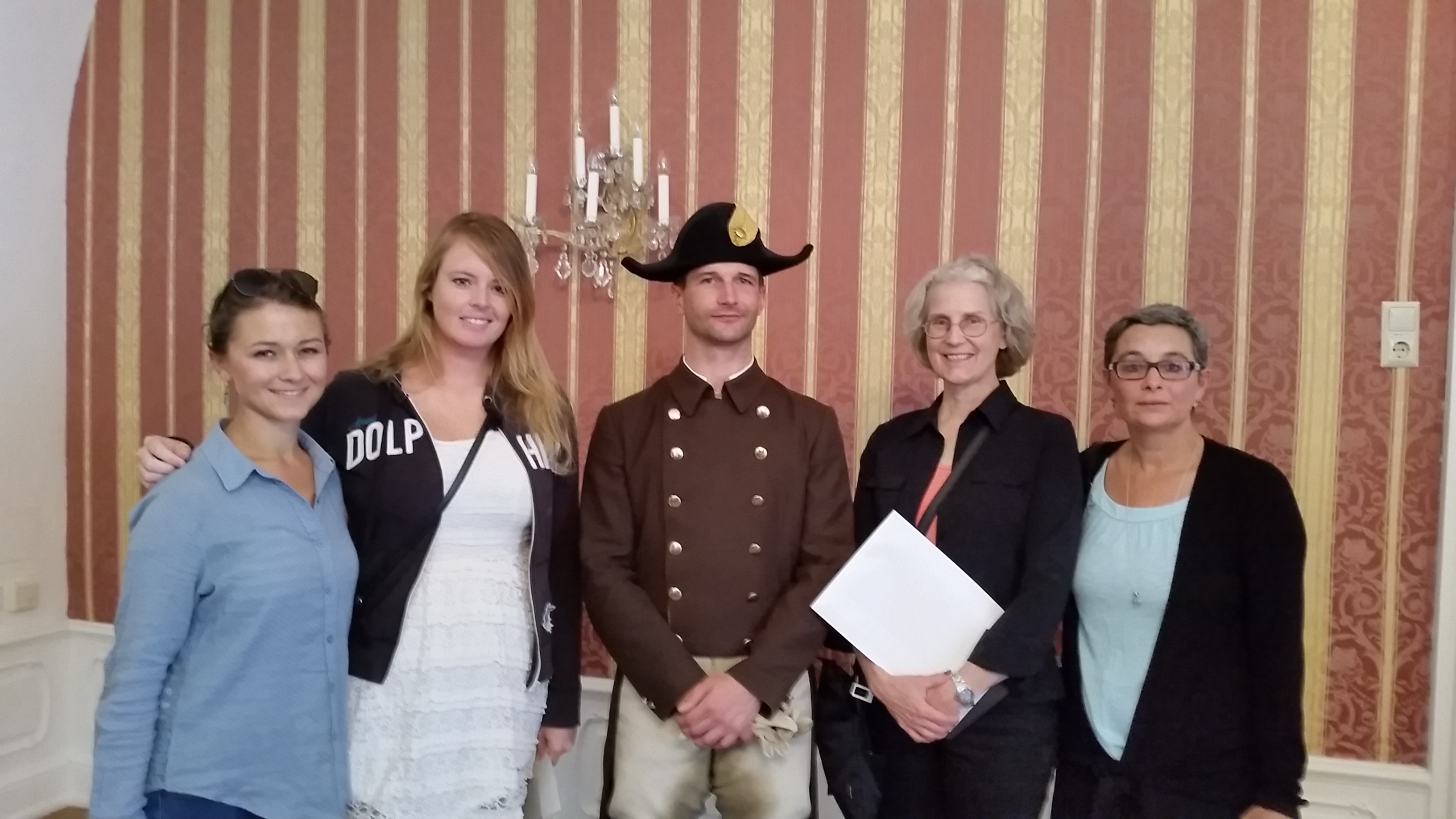