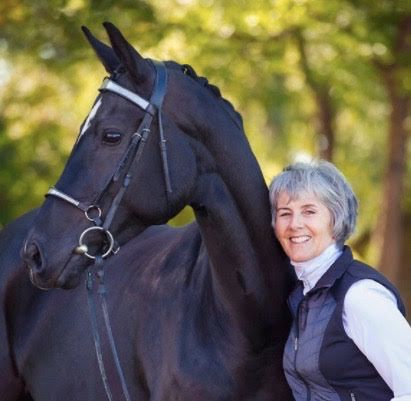 Roughly a year ago, I applied for the Gifted Memorial Fund Grant for Adult Amateurs and was  ecstatic when I received the scholarship. I applied to work intensively on my seat and position  with Sarah Martin. Sarah regularly clinics in our area, but usually only for two or three days at  a time and generally there are two month breaks in between. The scholarship allowed me to  work with her for five consecutive days. I hoped to accomplish two things—get tools to help  me self-correct my position, and develop a more sensitive connection with my mare, Believe  WS (aka Twiggy).

Taki Chi, the Martin’s barn, is situated at the base of the stunningly beautiful Mount Blanca in the San Luis Valley of Colorado. I traveled with barn-mate, Karen Harkin and her gelding, Milo, and met another riding friend, Donna DuBois and her mare Persia for this excursion.

On arrival, I was dismayed to discover my mare was in heat. Milo and Twiggy were very much in love after their amorous six-hour trailer ride together and frantic when separated. Twiggy  was uncharacteristically difficult to handle on the ground and I resorted to lunging to get her calm down, which was marginally successful. I was fortunate that a huge part of Sarah Martin’s  training program involves natural horsemanship ground work, tuning into the horses behavior  and helping them reconnect with their handler.

Over the course of the next four days, we began every morning with ground exercises which included:

Day 1: Our first ride began with relaxation walk work with the following exercises to assist with  loosening and suppling the horse.

Day 2: Today was more reinforcement of day one with my right leg. We also worked on getting  Twiggy’s canter more forward with a better separation of her strides. Her canter is naturally  collected so we worked at measuring strides between the letters trying to go from five strides  to four to improve her reach and swing of her back. Because of my “absent” right leg, Twiggy  developed a tendency to the left and therefore I was instructed to use my right leg on both the  right and left directions to keep her evenly connected more. Sarah also insisted I use more seat and leg and less rein to guide her.

Day 3: Today’s lesson was circles and more circles. There was more reinforcement and practice, practice, practice with moving Twiggy off of my right leg. We started with a 10-meter circle leg yielding to a 12-meter circle. We did multiples of these leg-yielding circles all along the  arena. “USE LESS REIN and MORE LEG” was a common refrain. Sarah had ridden my mare prior to me getting on and noted that she was behind her right leg and not moving into the left rein properly, a result of me often not keeping my right leg connected with her. Sarah rode her very forward in an effort to gain the connection between the leg and seat.

Day 4: Today’s lesson was leg yielding, shoulder-in and haunches-in exercises following our  warm up of days one, two and three. One leg yielding exercise I particularly liked was to begin with head-to -the-wall leg-yield to the left from H to E, then leg yield off the wall to the quarter-line and then straighten and ride a diagonal to K, followed by a 10 meter circle at K. This exercise was very effective at getting my mare to move off and be more responsive to my right leg and illustrated to me how important my right leg was in not just influencing the leg yield to the left but also defining the outer boundary of the 10 meter circle to the left.

During all the exercises, I was reminded to keep my “A-frame.” This is a great visual tool to  remind me to keep my belly button and seat bones aligned vertically so there is no tipping off to  the left or the right or in front of or behind the vertical while doing the lateral exercises. Also  she wanted me to use my “J,” which was shorthand for my spine to have energy flow down  and under my tailbone to keep my back from hollowing. Sarah said some people refer to this  as a conveyor belt where the energy flows down and under the pelvis and back up the front.  The conveyor-belt visual helped me to keep my seat moving with the motion of my mare.

Day 5: This day began with Karen and I taking a trail ride around a portion of the Martin’s 140- acre property. It was a departure from our usual morning ground work but equally effective in  relaxing for the horses and they came into their arena work already ready for the last day. Our  work today was focused on warm up prior to a show and determining what the horse needs  prior to a test. The goal is to check in with your horse’s relaxation, suppleness, quickness off  the leg and connection, in that order. You want to tune in but not over tune, and leave your best  work in the warm-up arena. Since we had already done our trail ride relaxation work, I did a  little of the suppling exercises to check for lateral bend which was good, followed by some trot  using the same leg-yielding circles described before to see if there was good quality of bend  both directions.

Instead of lengthening at the trot in her warm-up, Sarah often opts to do lengthening at the  canter to check that the horse is moving off the leg and if that is well connected and forward.  She frequently skips the trot lengthening since the canter work helps the trot. Following our warm-up, she coached me through my freestyle ride, and added commentary where I needed  that darn right leg or to not rush or hurry to get to a specific spot in my music. “Remember to  dance with your horse,” she said. The judge does not know your pattern and it is better to  flow with the music rather than trying to hit a prescribed pattern that doesn’t match the  music.

Something to mention to those who may not be doing this, have your instructor talk into your cell phone using a voice recorder app as they are giving your lesson. By doing this you can replay your lesson, word for word, which is much like another lesson with the instructor. It is very useful as a reminder for the issues that haunt us when we are working on our own. It helps to reinforce the key points and gets the instruction more ingrained and hard-wired. That way the next lesson isn’t a repeat of the same issues, but rather a starting point for additional training.

Our time at Taki Chi with Sarah Martin was very fruitful. It was especially helpful to have two of  my riding friends there to watch and learn from their lessons. Having others available to video  my rides added to the long-term benefits I gleaned from this experience. I heartily appreciate  the financial assistance from the Carol Lavell Gifted Memorial award, which allowed  achievement of the goals I had set. I know the information gained over the five-day intensive  sessions will carry me forward into a very productive riding summer and successful show  season. 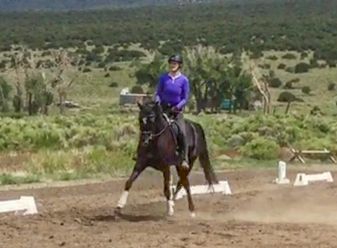 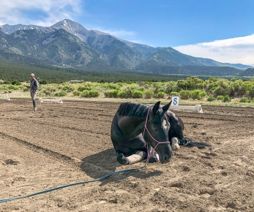 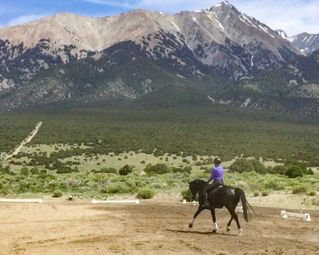