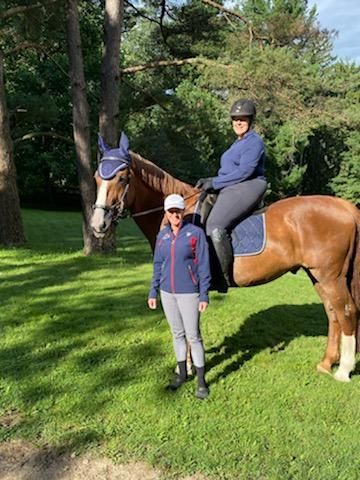 When I applied for this grant, my big plan was to take my horse Sully to a local show facility and ride with an educated, talented judge so that we could go into the show ring this summer and compete successfully at 2nd Level.  My entire focus was going to be learning to ride in the amped-up “show environment.”   We had successfully earned our 1st Level score towards our bronze medal and were surging ahead to 2nd Level.  Since Sully is 22, the goal was to progress as much as we could before his age caught up to us.   And then everything changed.  With COVID-19, canceling shows and closing of facilities, the plan was no longer achievable.

Instead of showing, I spent my summer trail riding, working obstacles, and riding at home with my local trainer.  We worked on connection, relaxation, having fun, and spent an inordinate amount of time bonding as I also ended up as stable help for the summer.

Slowly, a new plan emerged.  Why not take this time to revisit our skills, back up, and work on basics.  To build confidence in our abilities and to move forward in a slow, methodical way instead of going all out towards 2nd Level.  With luck, he would remain sound and we could go for our 2nd Level score next summer.  Instead of pushing forward, we were backing up.  And that plan worked great for both of us!

I had the opportunity to take a lunge lesson on a friend’s horse at another local barn.  This trainer was quite critical about rider position, and we spent the entire lesson focusing only on me -- the way I sat, the way I used my body, where my hands were, where my eyes were looking.  Throughout this lesson, we also revisited the theory behind the position and why it was important for the rider.  She did a wonderful job explaining everything and I left the ring feeling like I had a tune-up and was sitting better than ever.  I highly recommend lunge lessons for everyone!

I really enjoy riding with a variety of trainers and take the opportunity as much as I can.  However, I also feel it is important to ride with someone who is on the same page as my trainer.  It really helps me to hear the same thing over and over, but in different wording, until it eventually sticks.  Luckily for us, Jen Baumert lives near us and was accepting new students.  My trainer, Sarah Freeman, started riding with her and I had the opportunity to audit lessons.

Watching Jen teach, I felt an instant connection to her style and her ability to really explain what was happening at that exact moment.  Jen was very positive but wanted you to learn and to figure it out yourself -- she was quick to compliment when you figured something out, and quick to give ideas on how to fix a problem if you missed it.  I can hear a critique a million times but if you compliment me the one time I do it right, I will remember that more!

So, with the help of The Dressage Foundation's Gifted Fund grant, I signed on to take a series of lessons with Jen.  Our first lesson started off with a total back-to-the-basics.  Jen laughed when she told me the first thing we needed to work on was how to kick my horse more effectively.  I tend to do all the work for my horse, so we had to break that bad habit.  I would leave lessons exhausted, but not once I learned how to kick and how to accept nothing but totally forward motion.  Jen explained that I needed to take my leg off of him, and give a quick, sharp kick with the emphasis on coming off his body.   One kick and if there was no response then do two or three sharp, quick kicks and get my leg off.  Then if there was no response, one quick smack with the whip.  And it worked!  We spent the first 20 minutes or so perfecting “the kick” and accepting nothing less than forward.  He was finally carrying himself and doing the work.  We worked on this in every lesson and it would become my homework -- at no time was I to ride him without getting that forward response immediately.  Finally, I was leaving lessons without being exhausted.

The next bad habit to tackle was my seat…I needed to develop a quiet seat…I knew this and had been told by many trainers.  But, I had been so busy doing all the work for him that I had to learn to just sit; stop nagging, take my legs off and sit.  The quiet seat was actually easier to improve now that he was doing the work.  I quickly found that I could sit still at all the gaits and then everything else got easier as well.  I could use my seat and legs more effectively as aids instead of a “go forward” only gear.

Work on downward transitions came next.  I really thought we had these in the bag -- when I asked for a downward, we had it (unless we were crazy cantering -- more on that later).  But what I didn’t realize was that our downwards were actually “down and dones!”  New revelation -- when you do a downward transition there should be more activity and he should be ready to move off the leg instantly.  So, trot to walk to trot, and repeat -- if we could not trot right off as soon as we were walking, then the walk was not good enough.  We probably did thirty trot-walk and then right back to trot transitions until we got one that was acceptable.  And when we got it, I felt it and it was great.  This is a skill we will practice forever.  I used to use walk transitions as a chance for a break for me but realized that is why he always quit and was so much harder to get back engaged.

Another basic skill that needed refined was how to pick up my reins after a break or a free walk.  Usually, I would slowly gather up my reins while Sully meandered at his own pace and finally I would try to get him round and forward.  The first thing Jen had me do was get the forward back.  Legs on when I picked up the reins.  And no more dilly-dallying -- just pick up the reins and get him on the bit right away -- and do this by going forward.  The first few times found us trotting on a long rein around the ring.  Eventually, we got better at this -- mostly my issue as I still kept trying to do this slowly.  This skill will be a work in progress.

Getting some of these basic skills under control really helped our progress.  Do not get me wrong -- I have been told all of these things a hundred times -- but I never really focused on them, so they just were things to think about. But now we were conquering these issues.  We worked on these skills at every lesson, and we did move past them, too!

Trot work followed naturally and with a more forward horse without constant nagging, we were able to play around with more challenging exercises like changing the length of stride in the trot, renvers, shoulder in, shoulder-fore, and the “almost walk.”  Sully already knew half steps and so we were able to use them to help him get his hind end under him.  We had the forward, we were working on getting his hind end under him, and then (like a miracle) we had him on the bit, round, over his back, and lovely.  Jen had us doing many, many exercises to engage his hind end and keep us engaged.  Square turns at all gaits, leg yield off the wall to a shoulder in, renvers to shoulder in, and changes within the gait were all used to help us be able to control each step of the trot.

My personal stumbling block is the canter.  And what a canter Sully has -- he is a big boy with a huge stride -- and it is easiest for him to get rolling on his forehand and take over.  Stopping has been an issue as have decent canter transitions, and telling me to use more leg in a “wild” canter seems so counterproductive.  But Jen had us working on exercises before the canter that set us up for a controlled, “sit on his butt” canter.  The first exercise we did was to trot 20-meter circles to the left until it was a good trot, then add a 12-meter circle to the right then back to the left circle adding the canter as we switched the bend.  Another exercise had us on a 20-meter circle, then spiraling into a 12-meter circle, then leg yield out to the 20- meter asking for the canter as we hit the track.  Eventually, we were able to canter without the exercises if I set him up properly and had a great trot.  He only got strong and on his forehand a few times and I instantly did a square turn at the canter and he sat back and carried himself.  I amazed myself with how long I could consistently canter once he was carrying himself and I wasn’t hanging on for dear life.

It seems hard to believe how effective this intense training with Jen Baumert was for us!  There was nothing really new that was introduced, but the methods she used, the consistency of many lessons over a short period of time, and the positive reinforcement really made the difference.  This opportunity was far more beneficial than I could have imagined.  My training with Jen Baumert met all my goals and then some.  I will be forever grateful to The Dressage Foundation and the Gifted Fund grant for offering me the opportunity to grow as a rider.  The new confidence in my abilities, the knowledge gained, and the partnership with my horse is priceless.  Thank you! 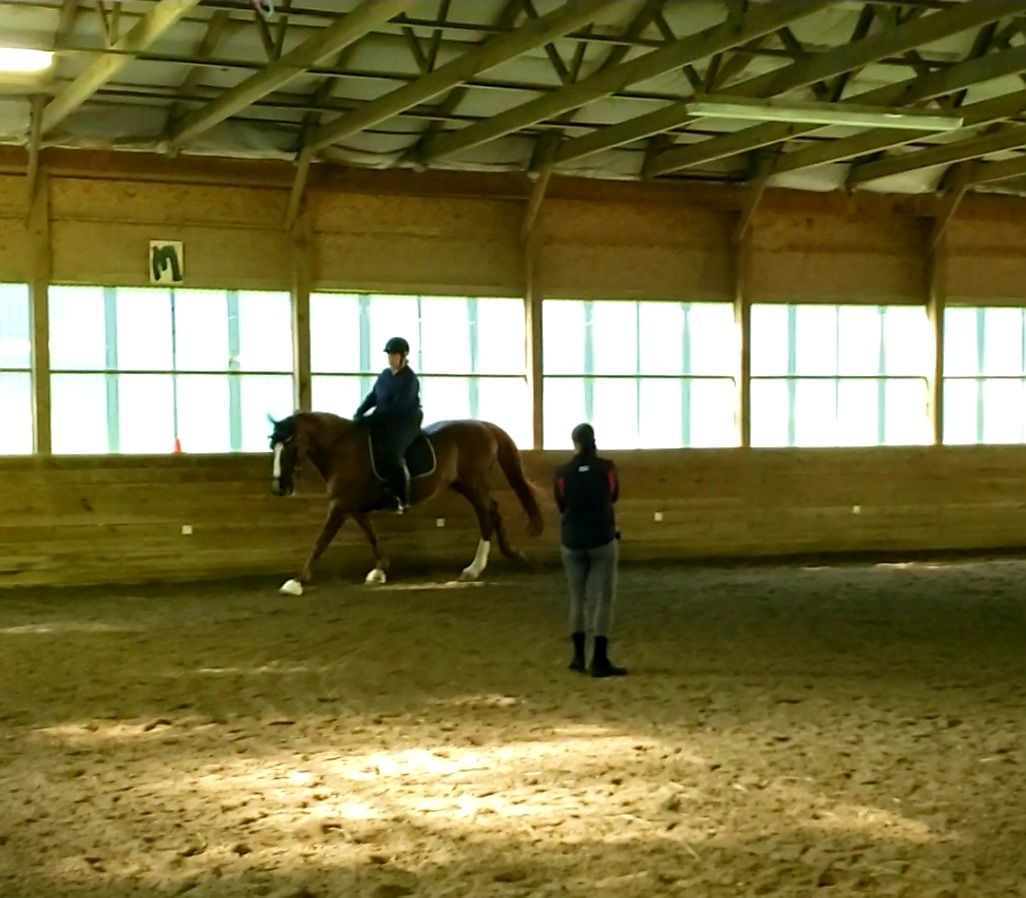 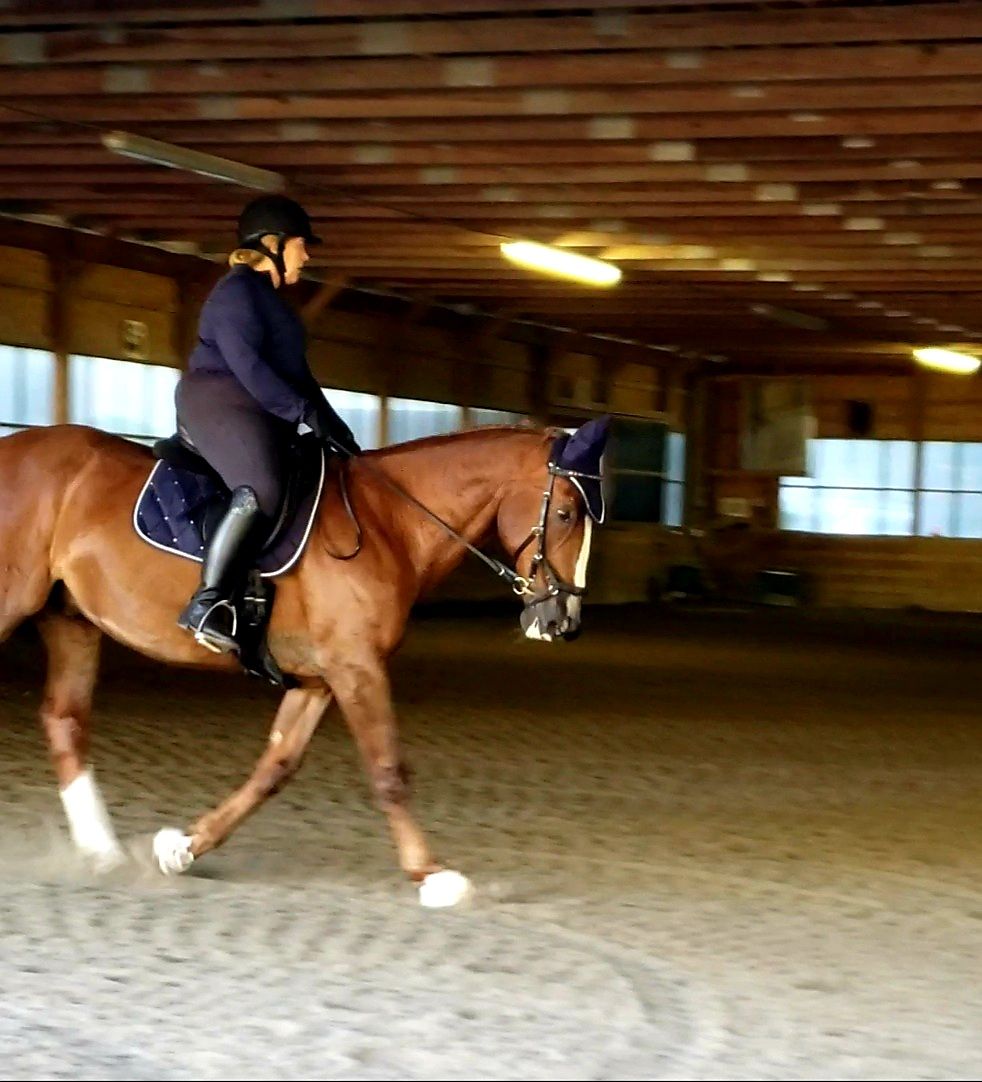 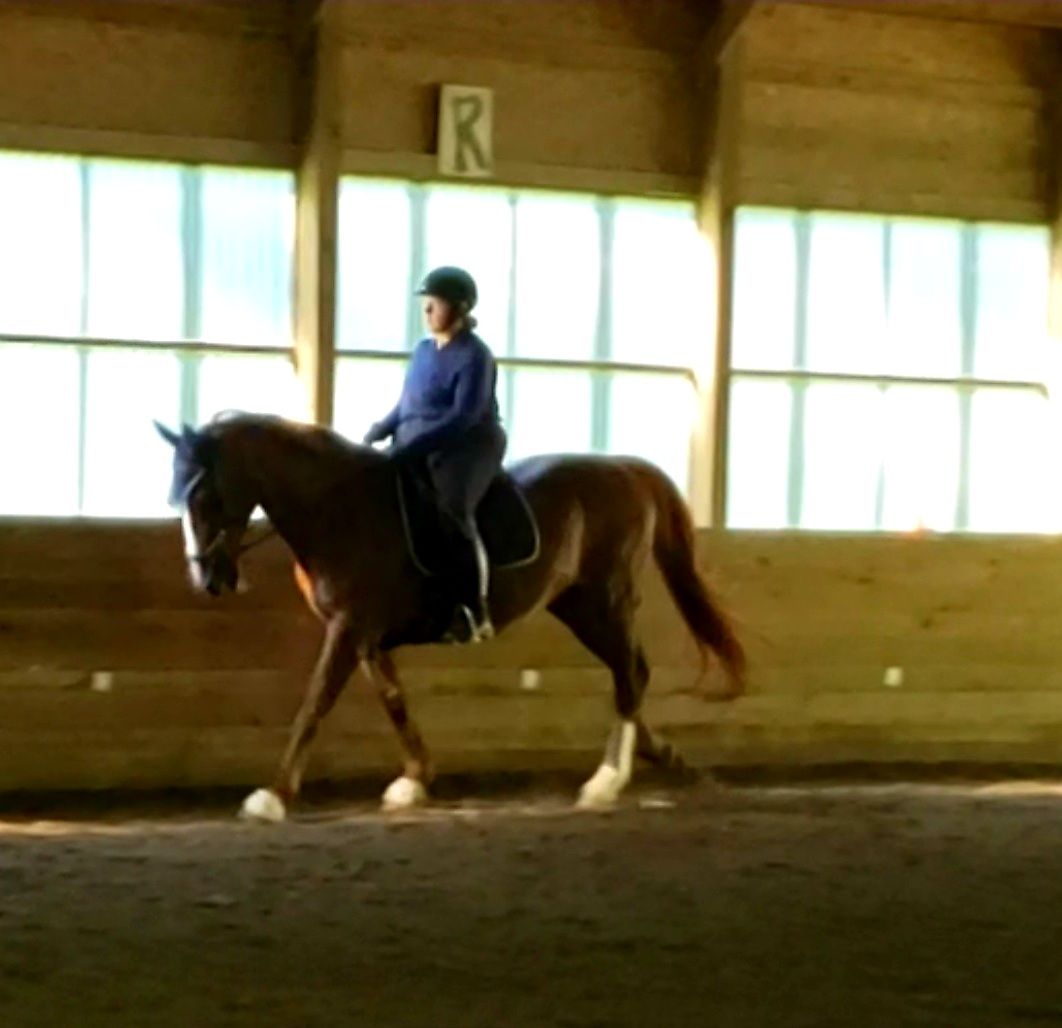