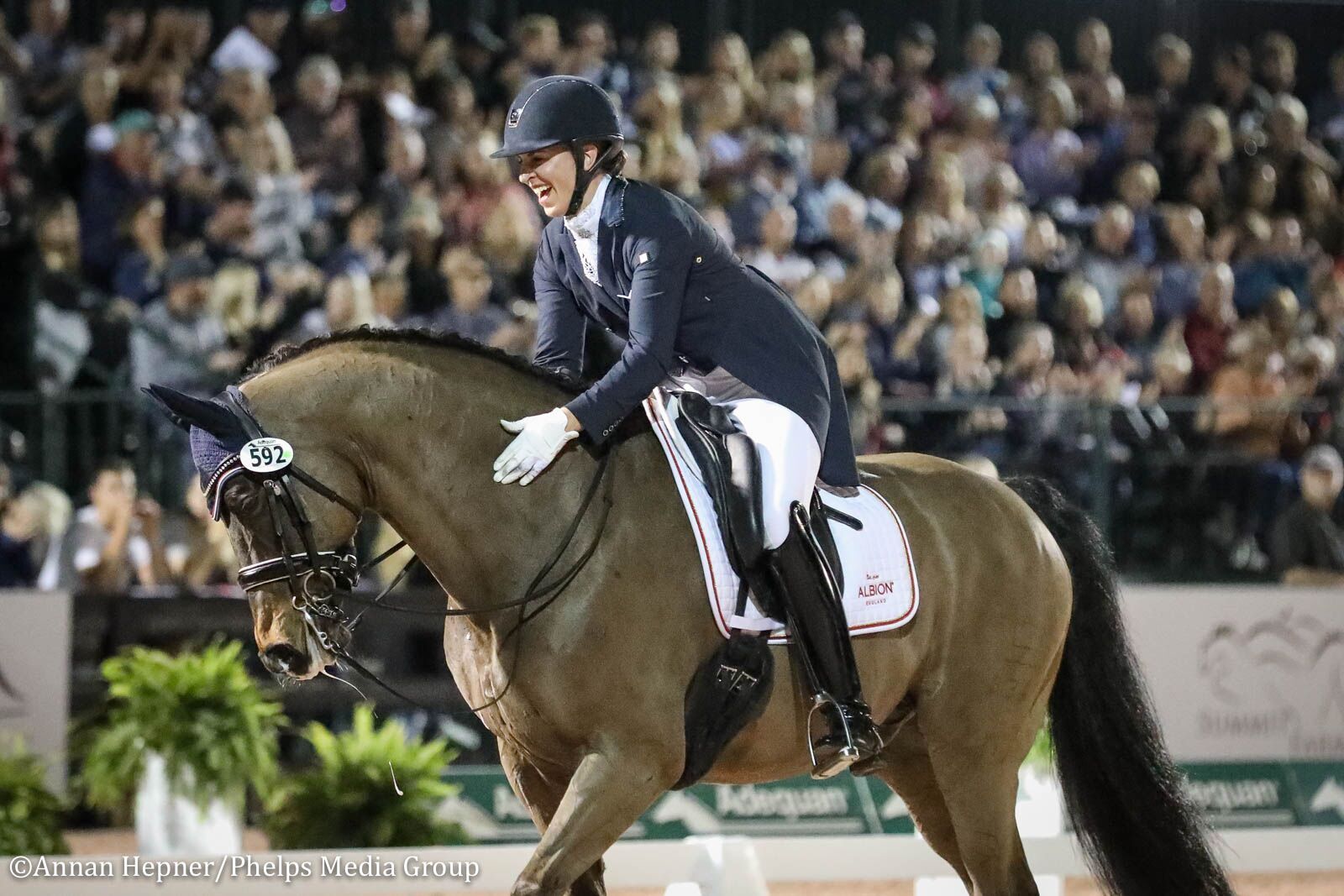 This year I was the fortunate recipient of the inaugural $10,000 Debbie McDonald Fund grant for Pacific Northwest FEI competitors. The grant was established at TDF by PNW dressage enthusiasts to assist riders in USDF Region 6 to pursue their goals of representing Team USA on the podium. Millione, the 17-year-old Danish gelding owned by the Millione Syndicate, and I had the opportunity to work with Debbie McDonald this winter and watch as she prepared her students and riders for the 2020 Olympic selection trials.

For me, it was a dream come true to venture out into the big, beautiful world of Wellington Global Dressage. I was amazed to see that there could be 50+ Grand Prix rides at every show. When we heard about the grant to help make that pathway possible, we applied right away. When we received the fantastic news of being awarded the grant at the end of 2019, MIllione and I began to plan our trip.

Our goal for 2020 as an Olympic year was to improve our scores to over 70%, make the pre-elite roster (need two CDI scores of 69-71%), ride in our first 4* and make a Nation’s Cup team. Of course, being on the long list, or dare I dream the short list, was a huge motivator! In addition, Millione was feeling stronger and better than ever, so we thought Florida was a fantastic option with many opportunities to learn and grow with several top instructors. My coach, Christophe Theallet, who I have worked with for the past four years, would be coming to give a clinic about midway through our trip. Christophe, for whom I am so grateful, has been very supportive and has changed my riding in a profound way these past several years.

My husband Alex and I, and our two children who are 4 and 8, headed for Florida January 3rd with 3 horses in tow and one meeting us there. We decided if I was going to spend significant time in Florida that we would do it as a family. We were able to enroll our kids into school and Alex set up a home office.  The horses travelled and settled in well and we got organized into our new digs for the season. The barn was about 15 minutes from our home, and we stabled just down the street from TYL Farm where Debbie teaches out of day to day.

I planned a schedule of 4 shows while in Florida. The first show would serve as a warm-up and a way for us to debut our new Vikings Freestyle. For the Olympic qualifications, the top three of our Grand Prix Special scores would be used to determine the average. Grand Prix and Grand Prix Freestyle scores do not go toward your final ranking.

The first show was about 3 weeks after arriving. Before the show we were able to get a few fantastic lessons in with Debbie. She is incredibly detailed oriented. One of her comments was to make sure I was adding energy for corrections and not taking energy away. She kept me accountable and pushed me to raise the quality of every ride. In our first Grand Prix of the season, we had to knock off some cobwebs but made it to the Freestyle (Top 15 advance) where I felt we had a very harmonious, mistake-free test. The crowd was incredibly electric at Global! They were very animated with their cheers and clapping. It was a feeling like no other! I was so proud of my horse, who handled the atmosphere like an absolute pro. We scored a 73.7% and placed 4th. We became hyper aware that giving away any points became the difference for several placings and significant prize money, as the margin was often .01 and 1%. 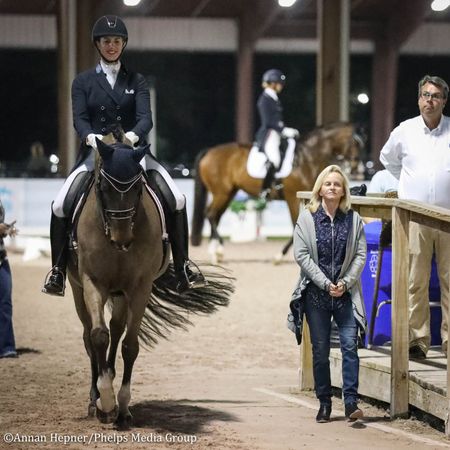 One of the main lessons I learned in Florida was time management. We set an ambitious schedule and that meant planning very specifically for showing, days off, recovering time, and lesson/training time. The timetable was incredibly compressed.

The timing of the first show worked out well and I was reminded how things can change quickly soon after. By the time the next show rolled around, the horses were more tired and the dreaded skin fungus was setting in. We did our best to navigate the situation and adapt. This show did not go as well as we would have liked, and we were excited to focus on the training again for the next two weeks and push through on the things that we could control.

In addition to working with Debbie, I was truly fortunate to work with some fantastic instructors during my time in Wellington including, Oded Shimoni, Steffen Peters, and Charlotte Bredahl. Charlotte helped me fine-tune the mechanics of the horse and my riding. Steffen Peters was so generous with his time and energy on my new horse Sandeman, an 8-year-old Hanoverian gelding schooling PSG/I-1. He even rode him several times to help me understand the feel that I needed to develop! Oded Shimoni helped me to further understand the philosophy of what I was trying to accomplish within the movements of the horse. He had a very calming effect on me and on my riding. He and Christophe have very similar teaching styles so I felt right at home. Oded was able to help me with our talented young horse, Joppe K, a 6-year-old owned by Bob and Tina Desroche and Lisa Norling. He also helped me and Millione make big improvements in the pirouettes. It all starts with a better mental understanding and then the physical aspect often follows through more easily.

For our third show, Oded was gracious enough to coach me in the warm up. I was beginning to feel all of the work coming together. The horses were in a good place energy wise and I had spent a lot of time mentally working on how I wanted my test to look and feel. This also would be my first 4* show and Millione and I felt ready! 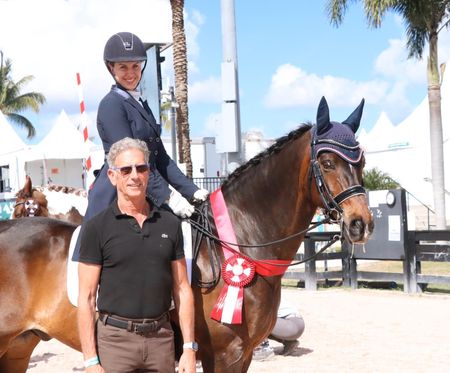 Millione put in some of our best rides to-date and we were able to achieve a score of 71% in our first 4* GP Special, which was good enough for third place behind Adrienne and Salvino and Olivia and Lonoir. One of our goals was to break 70% and it was a great show to accomplish this. Joppe also had a great show competing in his first FEI 6-year-old USEF final for an 8.3%.

In our fourth and final show, Global 10 held in mid-March, we hoped to have another good outing. This would give us our third score necessary to complete the requirements for our selection trials. This show was also special as we were named as the alternate for the US Nation’s Cup. It was one more piece to get us closer to representing the US in a more meaningful way. The show was our best yet! Oded was able to coach me again on both Millione and Joppe K. Millione improved his score and his ranking to finish a strong 2nd place with a 71.5%, just behind the incredible Ashley Holzer at 72.5%. Joppe had another successful outing in his first CDI for the 6-year-old test scoring an 8.5% in the final.

It was a great feeling to have ended the season on such a high note. The horses were tired and ready for a break, so it was the right time for us to complete our journey. This would also be mandatory at this point as Covid-19 was taking hold in our communities across the nation. It was clear that risks to everyone’s safety was rising and maintaining our health and the health of those around us was our new priority.

On March 31st, the horses and our family made it home safely. The journey was a beautiful one. It was hard, exhausting, and magical in every way. I came away feeling so inspired and hungry to maintain my current level of discipline. As I reflect, I am incredibly grateful for all the opportunities The Dressage Foundation’s Debbie McDonald Fund grant afforded me! I know that it was successful in taking my riding and training to the next level and it was the catalyst for making Florida our yearly mission moving forward. I am very appreciative to the team supporting us at Summervale Premier Dressage. Those riding, grooming, caring, and supporting our horses and clients’ needs are people who I feel fortunate to have a part of our barn family. They did a fabulous job and it truly makes this journey possible.

Bob and Tina Desroche purchased Millione in November of 2018 with the intent of supporting US Dressage, Millione, and me. Their belief in me and Millione has made a great impact on my ability to reach for higher goals. Their communication and interaction with me continues to garner my respect and gratitude.

I have been very blessed to have people in my circle who have truly helped me reach for my dreams. Bob, Tina, Lisa, and my business partner and friend Paula Helm, create adventures for us all to engage in and enjoy together.  I am so honored and blessed to have them and my family on this journey. Thank you to The Dressage Foundation for giving us the extra support that we needed to turn this next chapter into a reality. 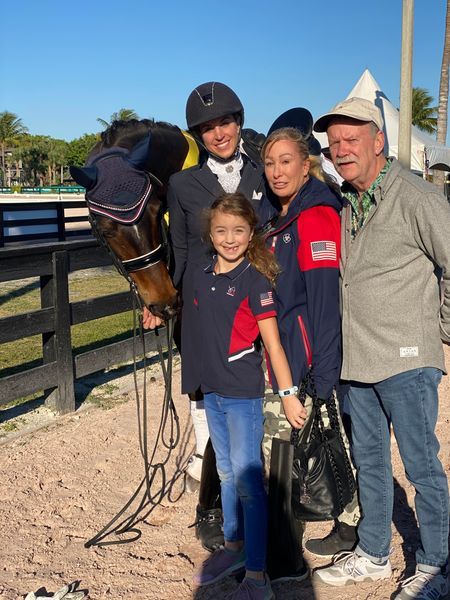 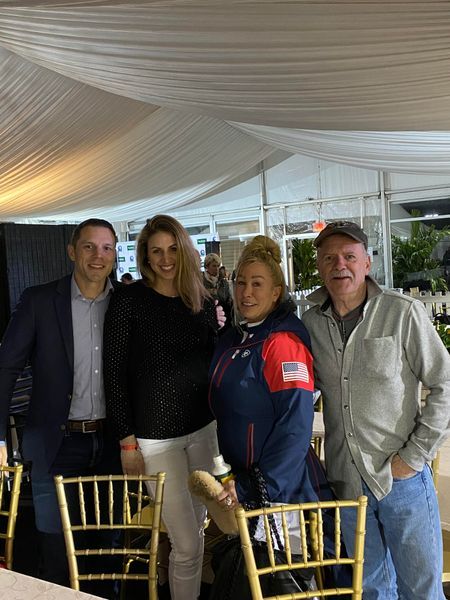