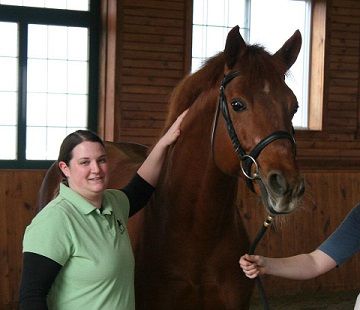 Thank you to the Dressage Foundation and all contributors for the financial assistance of the Grant for US Breeder Excellence that enabled me to travel to Vechta, Germany, for the Oldenburg Winter Meeting from December 3-11, 2018. This experience was second-to-none and I look forward to sharing and applying the knowledge I acquired on this journey.

I was lucky to find a traveling companion in a long-time friend and fellow horse lover whom this trip has inspired to get back into the saddle and finally take some dressage riding lessons! We met up in Atlanta and flew into the Bremen airport – arriving mid-morning on Monday, December 3rd. At the airport we met up with a fellow course participant from the USA and together we drove to Zuchthof Klatte, where I had arranged an informal tour. Here we met up with another course participant from Australia. We were warmly greeted by the farm manager and given a tour, first of the stallion barn where we got to see the stallions Carthago Blue (Chaccato/Carthago/Mr. Blue), Cornet’s Prinz (Cornet Obolensky/Almox Prints J/Polydor), Air King (Air Jordan/Contendro I/Heartbreaker), and Armison (Armitage/Cicero Z/Skippy II). Then we were shown the broodmare and young horse housing and pastures where we got to see several offspring from the stallions we had just seen (with the exception of Carthago Blue who at just three years old does not yet have foals on the ground). It was hard to miss that both Cornet’s Prinz and Air King are strongly stamping their get.

I found it very interesting that the stabling arrangements for broodmares and young horses in Germany are very different than we see here in the US with most living in large indoor pens in groups. The stables are thickly bedded in straw and cleaned only once a week or once every few weeks. Next we went to the training barn (down the road) where we got to see Chaccato (Chacco Blue/Stakkato/Mytens xx). This handsome stallion impressed with his quiet demeanor and kind eye. He is quite a character and enjoyed being fawned over. Lastly, at Zuchthof Klatte we saw the indoor riding hall where some American riders were trying jumping horses. 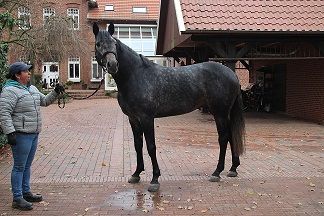 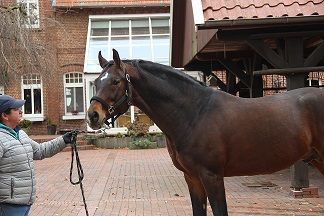 Wednesday, December 5th was the start of the Oldenburg Winter Meeting with 22 participants – most from England, a handful from the USA, two from Holland, two from the Czech Republic, one from Sweden and one from Australia. The participants ranged from stallion owners and seasoned breeders to trainers and mare owners just considering getting into breeding. Several of the participants had taken the course in May at the Oldenburg Summer Meeting and several had also purchased a horse from an Oldenburg auction within the last year.

The day started with a talk about the Oldenburg Verband and how it operates, which evolved into a discussion on the requirements for stallion approval (one participant had purchased a stallion and was leaving him in Germany to fulfill his testing requirements) as well as the requirements for mares to obtain Elite or Premium Status. After discussion we had a chance to view the horses entered into Saturday night’s auction. We saw each horse in its stall, and after a brief lunch, we observed a schooling session for several of the dressage entries. It was definitely a learning experience to watch the schooling sessions and then to see the horses again in the “big ring” later in the week. Some of the horses gave very different impressions from one setting to the next!

The last stop of the day was the stallion station Schockemöhle. This is a large facility of over 300 horses with several barns and arenas. We were greeted with politeness but promptly told there are no photos allowed and no touching of the horses (for disease reasons). It was awe inspiring to see such famous stallions! Among the favorites were Balou Du Rouet, Sir Donnerhall, Diarado, Fürstenball, Fürst Romancier, and Sandro Hit. The only stallions we saw out of their stalls were Sir Donnerhall (being groomed), Fürsten-Look and Diarado (both on the treadmill). Diarado thought the large group was very exciting! The breeding stallions are located at this farm but Schockemöhle also owns a separate breeding farm in East Germany where there are 3,000 to 4,000 broodmares and young horses!

Dinner in the evening was followed by a lecture on the linear scoring system recently adopted by the Oldenburg Verband. It was filled with great information and we learned a lot! What I found most interesting is the linear scoring sheet for each foal only shows the traits that deviate from average so each sheet is unique for what traits it shows! 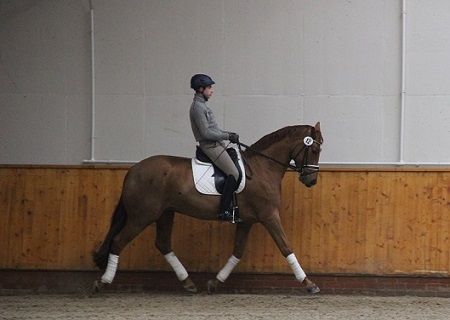 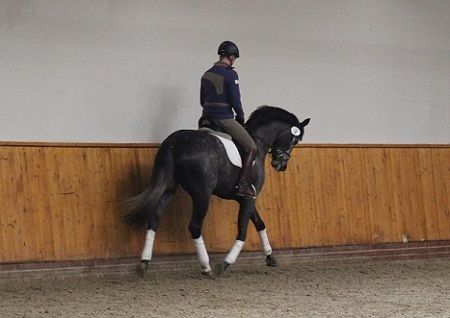 Day two of the course brought us first to the farm of Dennis Schüsselburg. We were treated to cookies and glühwein and a schooling session including jumping of the 5-year-old stallion Diamant De Quidam. We then toured the young horse stables and afterward Dennis presented two three-year-old stallions in-hand for us – Toulouse (Toulon/Canturo/Corrado I) and the champion of the 2018 Oldenburg Stallion days, Cavoiro (Casallco/Calido/Corofino I).

From here we went to the beautiful facility of David Taylor Dressage where we were treated to more cookies and glühwein and schooling sessions of two young stallion prospects. David chose these two stallions in particular because they are both three years old but very different horses to ride. The first was a lovely and gentlemanly chestnut by Bordeaux out of a Rotspon mare. David very much likes the Bordeaux offspring for their mental clarity and rideability. The second young stallion was by Fahrenheit. He was also lovely but spicier than the first stallion. Because of his work ethic, David is still deciding if the second young stallion will be presented or approval or if he will be gelded.

The last stop of the day was the immaculate facility of Dressurpferdeleistungszentrum Lodbergen. We were warmly welcomed by the farm manager Wolfgang Stagge, had the chance to watch a bit of a young riders’ clinic taking place in the indoor arena, and then we toured the facility and saw some of the famous stallions the farm boasts including Couleur Rubin, Rubin Royal, For Romance, and Dante Weltino as well as an exciting young stallion by De Niro out of the full sister to Rubin Royal. Tea and discussion followed. It is so nice how openly everyone shares information and opinions on the various stallions we have seen!

On day three we visited the state stud at Celle so we spent a lot of time traveling, but that is such a great time to chat and get to know fellow participants and learn what their experiences and thoughts on stallions and breeding in general. Our first stop was the Celle state stud stallion testing performance center at Adelheidsdorf. Housed here are some well-known stallions including Rotspon, Don Frederico, Grey Top, Viscount, and Escudo I. We first observed a schooling session that included Grey Top and a lovely son of Soliman de Hus. We then visited the stables and had fun looking for famous names. They have a unique feeding system and each horse is fed at the same time from a system of pipes that put feed directly into each feed bucket at the touch of a button. They have done a lot of work with a local university looking at horse digestion and feed primarily a diet of whole oats. The hay storage bay in the barn in also quite impressive! They try to buy an entire year’s worth of hay at once. In the jump schooling arena we watched a three-year-old stallion (Casall/Contender) schooling over fences. It was evident that he was very green over fences but he was very well behaved and our large group did not faze him at all.

We then drove to the historic site in the center of Celle where there were only a few two-year-old stallions recently brought from the upbringing station to get used to life in a stable. The rest of the horses had been moved to accommodate the large Christmas market that was taking place on the grounds. Some great Christmas gifts were found here!!

Following the shopping we went back to the Oldenburg auction center to watch a preview of the auction horses. As I mentioned before, it was very interesting to see the auction horses in a different setting- the auction ring is impressive and the horses seemed to feel the excitement. 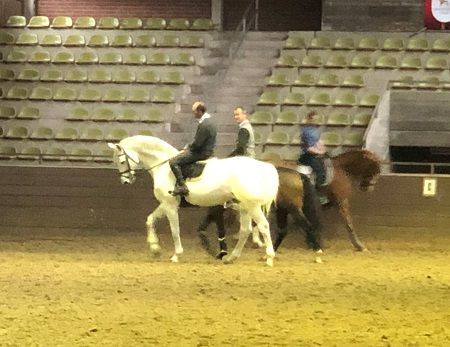 Day Four brought the course to a close. We had a light schedule with some tack shopping in the morning followed by the auction in the afternoon. It was a nice mix of dressage and jumping horses with the high seller being a four-year-old jumper gelding (Christian/Recaro Brilliant/Santorini). The quality of the horses showed but prices reflected the x-ray findings on several of the nicest entries. I have never experienced anything like this! The excitement of the auction is infectious and left me longing for something like this in the US. 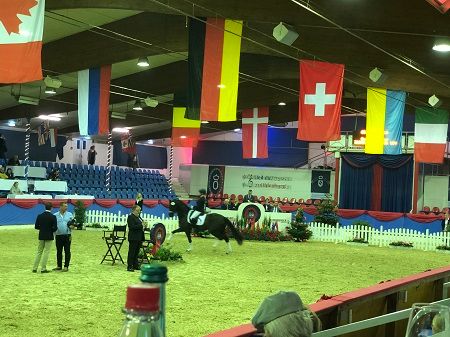 After the end of the course, my traveling companion and I took a little side trip to Vienna to visit the Spanish Riding School. On our tour here we learned a bit about this historic breeding program. The school houses about 70 stallions but they are split between the facility in Vienna and a training barn in the country. Each stallion spends about fifty percent of the year in Vienna and fifty percent in the country. An additional facility, around 250 km away, houses the mares and young stock. Around 40 foals are born each year. The best are selected to remain in the program and the rest are sold. Once a stallion enters the program, he has a home for life. Upon retirement he will either remain at the school in Vienna or move to the countryside farm. There are six stallion lines from which all of the stallions descend. Each stallion is named according to the stallion line he descends from as well as from his dam. While we were unable to watch the stallions perform, the tour was packed with information and the guide readily answered my (many!) questions about the breeding program at the Spanish Riding School.

I cannot even begin to write all of the information that I learned from this trip! I hope this provides a glimmer into what our days were filled with. I returned home with a brain full of information and a heart full of gratitude for this opportunity! Thank you!!! 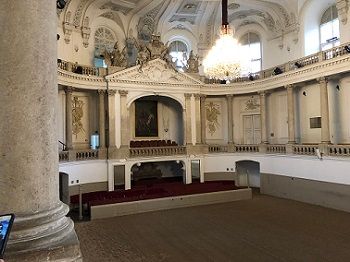 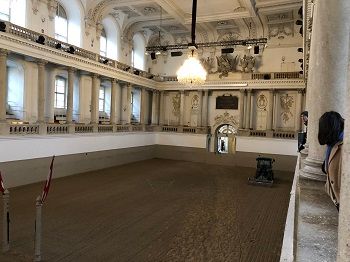 Click here for information on applying for a U.S. Breeder Excellence Fund Grant from The Dressage Foundation.