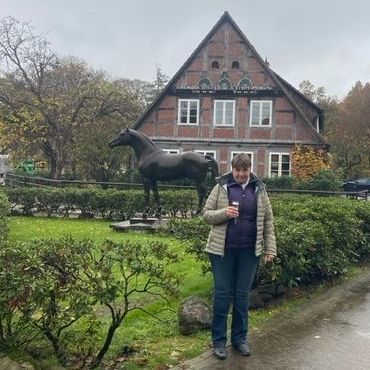 As the 2021 recipient of the U.S. Breeder's Excellence Fund, Meg Williams of Oakwood Farms (IN), attended the Hannoverian Verden Stallion Licensing and Stallion Sales in November 2021 in Germany.

On the first day, Hengststation Pape was a long bus ride, but I got to see the incredible countryside. The farm is in a great location because of its rich soil for raising youngsters. It is a very well-run farm with particular interest to me because they raised the stallion I own, Fabregas. They also stand the stallion Don Nobless, of which I have a daughter in my breeding program. It was great to see him in person. They also stand other stallions including Despacito, V-Plus, Scolari, and Macciato.  Also, that day the group went to the family of Mahler and the Luhrs in Osten, Germany. Here Maureen Schlender and I got to judge a few mares that needed to be inspected and saw some of the beautiful foals. It was great standing next to a German judge to keep your eye on the track.

We then went to Klosterhof Medingen, a place I have always wanted to go to. It was originally a monastery, and the history is just incredible. We have nothing like it in the United States. The famous statue of Caprimond stands at the entrance of the farm. Caprimond is the sire of Contucci that stood at Hilltop Farm and was a great influence in U.S. breeding. I once had a foal the farm raised named Carmal Crème. I was able to train Carmal all the way up to Grand Prix dressage. They also stand very popular breeding stallions like Borsalino, Damaschino, Dameron, Escalito, Escaneno, Garrett, Quantensprung, St. Emilion, Va’ Pensiero, Karajan, Kataro, and Emperor. These are the stallions that stood legends like Caprimond, De Niro, Danone, Hohenstein, and many others. Their stallions have had a large impact on modern-day warmbloods. It was so valuable to see some of these stallions stand up and move. This gave me a new perspective on making breeding decisions.

That afternoon, we went to the Stallion Licensing to watch the free jumping of 65 different 2-½-year-olds who were bred for dressage. This was the first year that the Hannoveraner Verband split the dressage and jumping horses into two different licensing events. It was great to see these young stallions still go through the jumping chute. Although they are not necessarily bred to jump, I feel it is good that all horses can at least jump a little. They all went through the chute a few times, and you could tell some really enjoyed it. Some of the better hunter horses in the U.S. come from dressage-bred horses. I feel this is a very good trait that we should keep in the horses, especially as jumping has very high heredity factors. 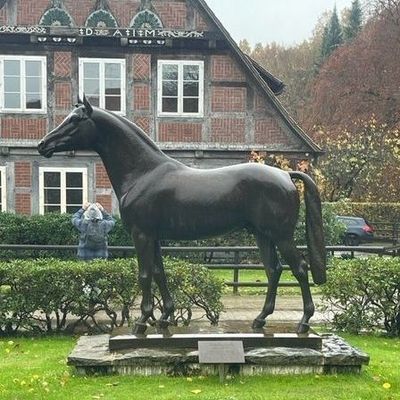 The next morning, we saw all these lovely stallions outside on a large triangle. I was able to position myself so I could see them coming at me, and so I could also see them leaving the triangle. It gave me a close view of the overall horse and correctness of each of these young stallions. When you see several of them from the same sire, you can start to see characteristics that come from the sire. This is very helpful when I am judging and guiding other breeders at the Hanoverian inspections in the U.S.

In the afternoon, we again saw all the stallions, this time lunging with a bridle, surcingle, and side reins in both directions. They made a round lunging ring out of standards and poles. It was fun to watch a few of the rings go at the same time and compare them with each other. Saturday, the final day, was the free presentation and held the announcement of premium stallions and which stallions were going to license.

The F line and the D line were also well represented. There were six premium stallions Furst Belisro/Sam Remo (who was my favorite) went for 210.000 euros. Escammillo/De Niro went for the highest price of 700.000 euros. The average price for a licensed stallion was 125.346 euros. 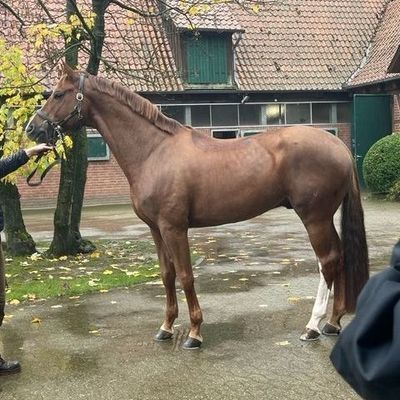 Damaschino, a stallion at Klosterhof Medigen

Another highlight was that the Verband named Fidertanz as the stallion of the year. He was brought into the ring and presented. This stallion did not show his age at all and was very electric in the auction hall. It was fun to see him presented in hand and to see how this stallion can still move. What a producer he has been for the breed!

The night before the auction was a Breeder’s Gala. At this gala, Dr. Ludwig Christmann had a surprise retirement party. I was so glad that I could be a part of this because I have known him since 1988. During the evening, there was a slide show with pictures of Dr. Christmann throughout his years with the Hannoveraner Verband. Since Dr. Christmann spent so much time in North America, there were lots of photos with him in the U.S. judging mares, foals, and stallions.  He has contributed so much to U.S. breeding. Maureen Schlender and I were able to present him with his award. This will always be a special memory to me. 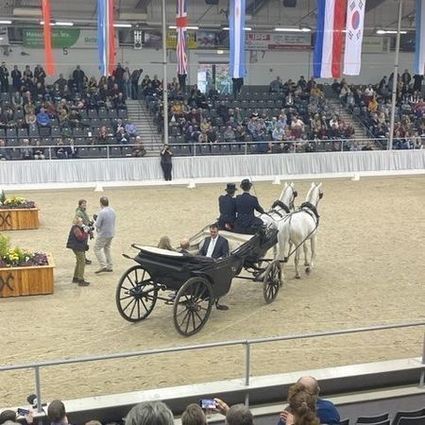 Dr. Ludwig Christmann's retirement ceremony before the start of the sale of the stallions in Verden

Thank you to The Dressage Foundation for making this trip possible and for the education it has provided me. I now hope to be able to share this with other breeders as a chat at inspections, breed shows, or just a casual conversation. 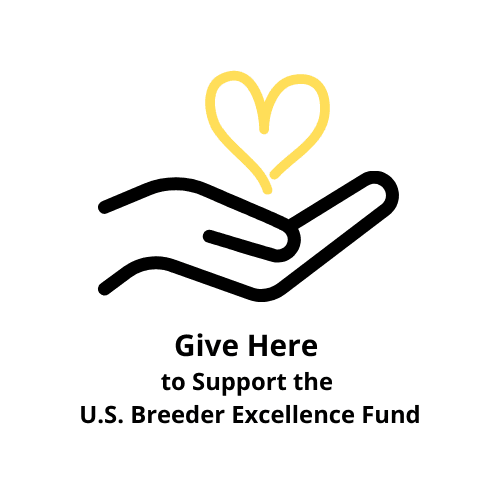