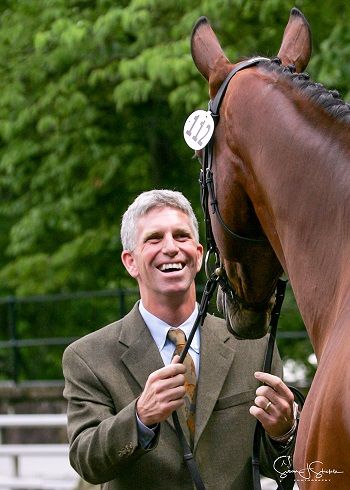 December 5, 2018 – The Dressage Foundation (TDF) is pleased to announce that a new Grant Fund has been established by friends and colleagues of George Williams, to honor his years of dedication and service to the US dressage community.

Wanting to honor Williams’ lifelong commitment to the sport and acknowledge his nine years as President of the United States Dressage Federation (USDF), Janna Dresing, Dr. Jeni Gaffney and Gardy Bloemers initiated the idea of this Fund.  Dresing shared, “We felt that George has given so much to the dressage community in all of his roles within the USDF, and that creating a scholarship in his name would help honor his commitment to the sport. Through the generosity of the inaugural donors we are able to do something meaningful for the sport in his name.”

Williams was surprised with the news of the Fund at the USDF Salute Gala on December 1st.  After the announcement, he said, “I am honored to have a Grant Fund in my name, which will have a goal of helping up-and-coming young equestrians.  Thank you to all the donors."

TDF’s President and CEO, Beth Baumert, shared, “Those of us who hold USDF dear will never forget George's many years of wise and steady leadership. His contribution to dressage is impossible to calculate, and he set a fine example for us all. It seems very fitting that this Fund will continue beyond his tenure, giving in his honor.”

The Fund’s inaugural donors would like to invite others who admire Williams to make a donation to the Grant Fund.  One of the inaugural donors, Gardy Bloemers, has generously offered to match the next $5,000 that is donated to the George Williams Fund.

TDF’s Board of Directors and staff will work with Williams to establish the Fund’s specific purpose and guidelines.  Grants will be awarded to support the US dressage community.

For more information about this Fund contact Jenny Johnson at (402)434-8585 or jenny@dressagefoundation.org.