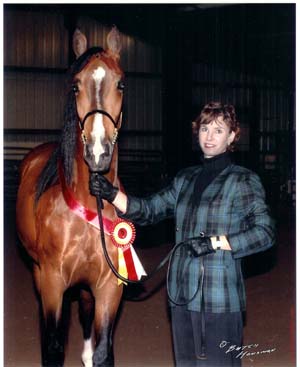 My horse, Ragg Tyme (aka “Muffin”) isn’t special because I’ve achieved the most with him. There are others with whom I’ve achieved far more awards. But he has taken me to places I never thought I’d go and taught me more than perhaps any horse I have known to date.

Back in 2001, I fell in love with his father, the Dutch Harness Horse stallion Fabricius. So, I went out and bought a mare to create him. Muffin was conceived using artificial insemination (a topic that fascinates many a nuclear cardiologist—who knew?) during the year of the “cherry tree leaves” in Kentucky when a number of Thoroughbred mares reabsorbed foals due to the leaves’ attraction of eastern tent caterpillars, which causes reproductive loss syndrome in pregnant mares. Thankfully, his mother was in La Grange and away from the worst of it. Her pregnancy went forward normal. But, it was scary for me for awhile.

Determined to foal him myself, I got a video tape from Jeffers on equine birthing and prepared for the big day! He came out relatively uneventfully—just one long cannon curled under the forearm. Other than that he was fine. My dog loved eating the bloody rubber gloves I kept tossing out of the stall and I was picking up purple glove pieces for weeks afterwards around the farm. Overly concerned about him getting colostrum, I had to have a friend come over at 4 am to help me get him to his feet so he could nurse (thank you Kim). He was a big foal!

Star, strip, snip and three white feet, he was a handsome, confident youngster and went on to win the first ever class of Renai foals (DHH stallions X Arabian Mares). As a yearling, he won an Arabian Horse Association Regional Top Five in Half-Arabian Gelding Halter. Although he was bred to be an “English Pleasure” horse, it was clear that was not his forte. Instead of selling him, I changed disciplines and started into Dressage. He had a few injuries as a young horse and riding was sidelined by a long recovery process. After a couple of years, he was sound enough to show in-hand. Our local Arabian club sponsored the ribbons at the Kentucky Dressage Association’s In-Hand show for an Arabian class. So, I cleaned him up, braided him, took him to the show to support the class. Not being a great runner myself, Christine Smith graciously agreed to show him for me—and they won!

Periodically, I’d try riding him. But his injuries left him unable to lunge down and he was VERY athletic! So, I waited and gave him more time. In the meantime, I became involved with the Kentucky Dressage Association, was elected to the Board of Directors and then served a term as President. (In 2010, another horse came along who helped me get my USDF Bronze medal.)

In addition to giving me the Dressage bug, Muffin introduced me to driving. Having seen a number of horrific driving accidents, I never figured I’d get behind a horse and drive one. But, the injuries and athleticism became a non-issue for him when he drove. So, I had him broke to drive and eventually got brave enough to take over the lines. I know this horse well enough to trust him as far as I can trust any horse. He’s gifted, he’s athletic, he’s hot and missing an off switch when he goes into overdrive. But, I know how to keep him calm and calm him down. Over the years, there have been several times I’ve thought, “I’ve got to fix this and I might get killed trying…” Each time, he was a perfect gentleman. So, of all the horses for me to choose to drive, it was him. He is a wonderful and patient teacher—as long as you listen and pay attention to him! Last year, we logged 25 hours of drive time with our local harness club. Now 17, he is still quite the picture and could pass for much younger.

Had he not been in my life, I’d probably still be stuck in breed circle-land knowing a lot less about horses. For expanding my horizons and teaching me so very much, he is truly the horse of my lifetime. And, yes, he knows he’s my favorite—and so does everyone else in the barn…. 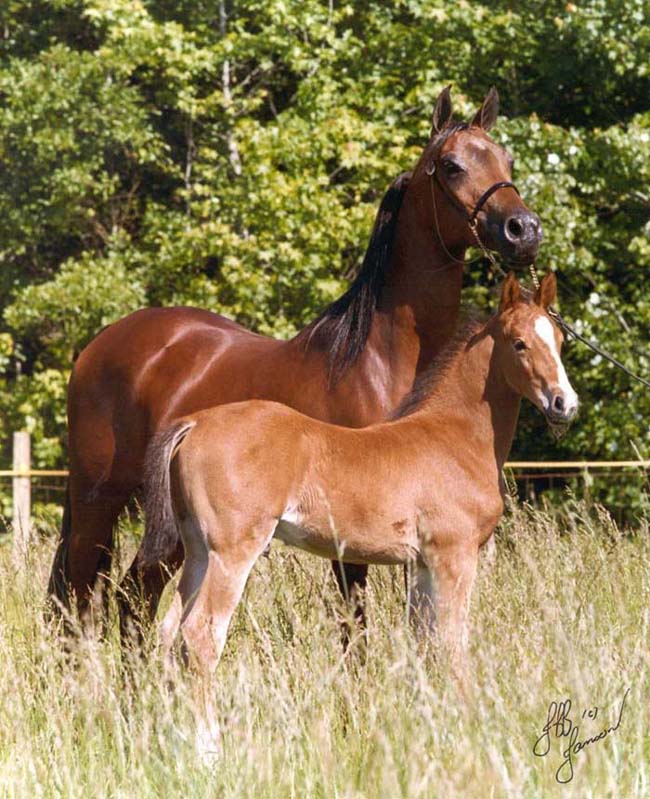 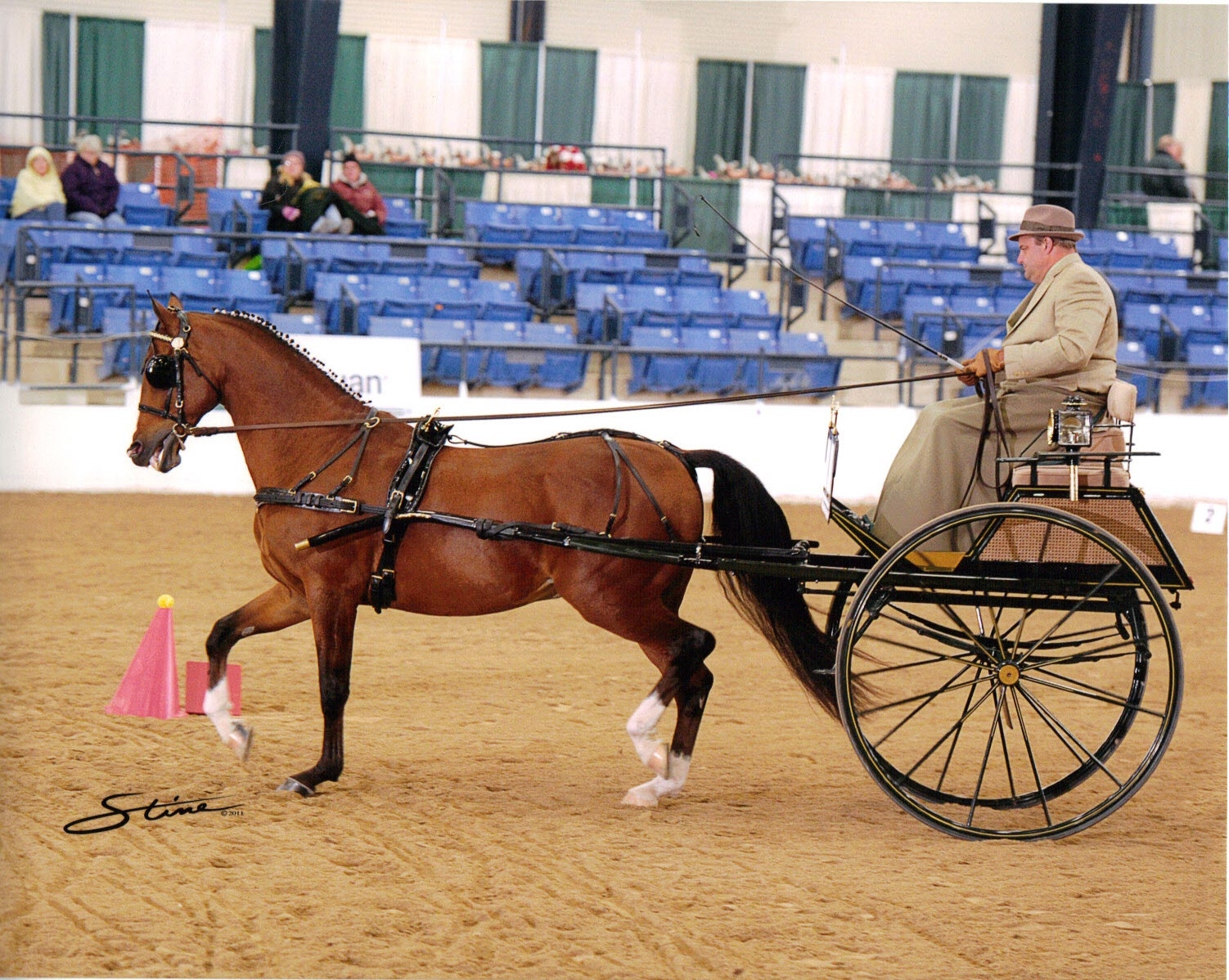 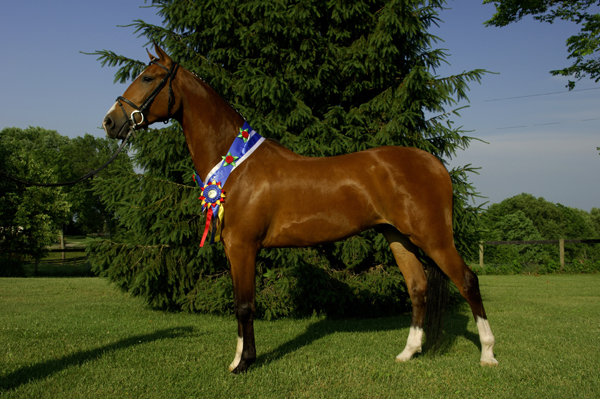