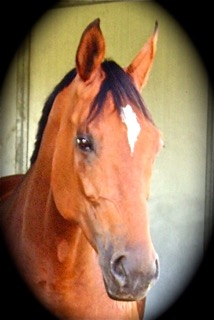 My husband and I were pretty discouraged after two negative pre-purchase exams.  But we kept looking.  Out of desperation we went to an obscure trainer across the street from Hilda Gurney's place.  The advertised horse was disappointing.  For fun, the guy brought out two filly sisters coming three years.  He thought I might like the chestnut and let them loose in the arena.  It was the bay who caught our eyes and when she stopped playing and came to me putting her head down, I would have probably bought her right then, but she was too young and not started under saddle.  He tried to convince me to pay him to start her but I thought that was a crazy idea.  I was a green rider in my mid-forties.

We did visit her a few times.  Fast forward six months...we got a call that she was lightly under saddle.  "Come out, I will give you a lesson on her," he said.  So I did.

A couple months later she was in the barn in Orange County where I was riding and we doted on her, naming her Mailani as we had a plan to move to Maui (she should have a G name, being a Grande granddaughter).  We gave her a few months to settle to training barn life.  Then we put her in training and never looked back.  The filly I thought would be a good low level horse for green rider me blossomed into a stunning big mare who learned everything asked of her.  So smart and athletic, she had no problem with any movement.  After just a couple shows she did her PSG debut at the Del Mar National.

Prior to moving her to our little ranch on Maui, we trained with USDF gold medalist, Carol Robertson.  With Carol coaching us from the ground, we learned the one's together.  To Carol's surprise, Mailani learned the canter zig-zag in one lesson.  She was an absolute pleasure to ride.

We did move her to Maui with us and she gave us two foals, one by Rotspon and one by Kostolany.  The mare and I ponied both foals and she was a fantastic teacher.  She went bone-on-bone in a fetlock after the second foal and although we had the joint fused, I never got her back as a riding horse.  She was able to stay with us, though, and we loved her so very much.

Right before her 20th birthday, she fractured her right front leg in her stall.  Our dear vet did not know how she was standing, but such was her heart.  Somehow she managed to take that one last walk into her pasture with me and we put her to rest there.

She taught me everything I know about horses. She changed my life and I will love her always. 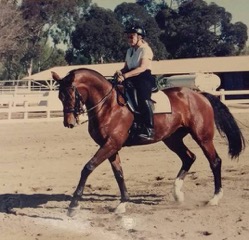