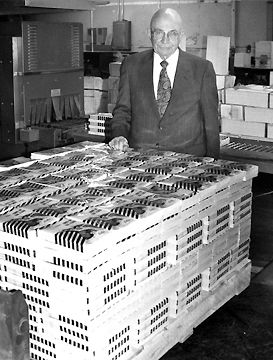 As the nearby photo shows, Lowell Boomer launched Boomer’s Printing Company in 1919, with a mimeograph and multigraph machine, printing letters for his mother’s Teacher Placement Agency in Lincoln, Nebraska. Lowell was 15 years old, and in high school at the time.

He presided over Boomer’s Printing Company for the next 74 years, as it grew to serve customers in a large regional area. One of the printing company’s most well-known customers was Cliff’s Notes, which Boomer’s printed, warehoused, and distributed for 43 years. In 2001, Lowell Boomer arranged for the company’s long-time employees to purchase his stock, thereby turning ownership and management over to them.

Lowell Boomer gained two solid tax advantages for making these estate plan arrangements. The first is the avoidance of paying capital gain tax on the highly-appreciated value of the closely-held company stock he placed as assets in the two Unitrusts, thus avoiding the erosion of the asset value up front, as the Unitrusts were established. The second tax advantage is a substantial charitable contribution income tax deduction, to be taken at the time of the Unitrusts’ creation, thereby lessening his payment of income taxes.
In short, many good things were accomplished for many persons through the use of these two Charitable Remainder Unitrusts: Lowell Boomer allowed his long-time employees to purchase his Boomer’s Printing Company stock from the two Unitrusts, he gained solid tax advantages by so doing, he held an income stream from the two Unitrusts for his lifetime, his two sons and daughter-in-laws gain a fixed rate income during their joint lifetimes, and in the end, The Dressage Foundation gains the remainder funds to carry on its mission to cultivate and provide financial support for the advancement of Dressage.

Said Lowell Boomer, “Through the use of these two Charitable Remainder Unitrusts, I have been able to extend the value of assets built over my lifetime to provide income for me in my senior years, to provide income for my two sons and their families during their senior years, and then to help the equestrian sport in which my family and I have spent so many enriching, enjoyable years.”

And a happy postscript: In 2004, Lowell Boomer sold some long-held land, highly appreciated in value over the years, for $74,000. He “poured” these funds equally into the two Unitrusts, thereby enhancing value for everyone.