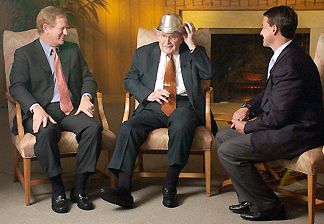 Donation of a Promissory Note… A Great Charitable Gift

In October of 1998, Lowell Boomer sold his beloved “Great Plains Equestrian Center,” where hundreds of Dressage and Jumping Horse students and families had spent hundreds of hours learning, practicing and competing in equestrian sport. The buyer paid some cash, and signed a promissory note in the amount of $255,000 dated October 1, 1998. The buyer‘s first payment in the amount of $1,783 was paid on November 1, 1998, with subsequent payments due on the first of each month thereafter until October 1, 2008, at which time the entire remaining balance, including accrued interest, was due and payable in full. The buyer re-sold the property in 2003 and The Dressage Foundation received a check from First Nebraska Trust Company in the amount of $277,774.06.

In The Dressage Foundation Donation Receipt Letter to Lowell Boomer acknowledging this major gift, the Board of Directors said, “That you designated your gift to be used for general operating expenses of The Foundation is especially meaningful, for this is often the most difficult money to raise.”

For Lowell Boomer, his gift was fully deductible as a cash donation, in an amount up to 50% of his adjusted gross income, with five additional years allowed by the IRS over which to carry forward any unused balance.

Lowell Boomer is the founding organizer of the United States Dressage Federation in Lincoln, NE in 1973. He served as Executive Secretary of USDF for twelve years, followed by four more years as President.

Lowell Boomer has been honored throughout his lifetime with prestigious equestrian awards. He is the first inductee into the USDF Hall of Fame, the founder of the Nebraska Dressage Association, the recipient of the Braley Gray Award, and the United States Equestrian Federation’s sterling silver cowboy hat emblematic of USEF’s Lifetime Achievement Award. The Chronicle of the Horse named him “One of the 50 Most Influential Horsemen of the Twentieth Century.”

In 1989, Lowell Boomer formed The Dressage Foundation in Lincoln, Nebraska, “to cultivate and provide financial support for the advancement of dressage.”

Lowell and his beloved wife and life partner, Gladys who died in 1987. Gladys was at Lowell’s side, every step of their lives as she helped raise two sons, was principal homemaker, worked at Boomer’s Printing Company, and best of all, was a “great equestrian wife and mom.”