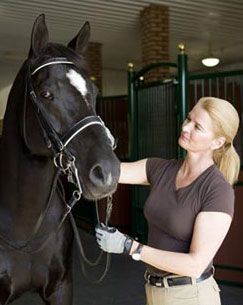 December 19, 2012 - The Dressage Foundation has announced that a total of $10,000 has been awarded to U.S. dressage instructors through the Major Anders Lindgren Scholarship program, funded through The Dressage Foundation’s Carol Lavell Gifted Memorial Fund. The Lindgren Scholarships provide financial support that enables dressage instructors to train in a concentrated amount of time in order to improve teaching, riding, and training skills. This year, the Selection Committee chose the following recipients:

Stacey Hastings (Mooresville, NC) was awarded the $6,000 Lindgren Scholarship. Stacey has been a dressage trainer for over 25 years and is based at Full Circle Farms in Statesville, NC. She has trained and competed a number of horses through the FEI levels, has had many successful students, and is also a USDF Certified Instructor through 4th Level.

Anne Aloi (Chesapeake, VA) is the recipient of a $2,000 Lindgren Scholarship. She has been instructing for over 30 years, from Training Level through Prix St. Georges. Anne is a Bronze, Silver, and Gold Medallist and has volunteered her time with the Full Circle Pony Club in Statesville, NC and acted as the chef d'equipe for the winning FEI youth team at the 2012 USDF Region One Youth Team Competition.

Donna Meyer (Bryan, TX) was also awarded a $2,000 Scholarship. She has been a dressage instructor for over 29 years, teaching Intro through Fourth Levels. Additionally, Donna is a USEF "r" Judge, a USDF Associate Instructor, and an active competitor, having earned her Bronze and Silver Medals.

Applications for the three Lindgren scholarships are due to The Dressage Foundation by September 30th of each year. A Grant Selection Committee will review each application and determine the recipients, if qualified applications are received. For more information about the Major Anders Lindgren Scholarships and The Dressage Foundation, please contact Jenny Johnson at (402) 434-8585 or visit the Major Anders Lindgren Scholarship page.