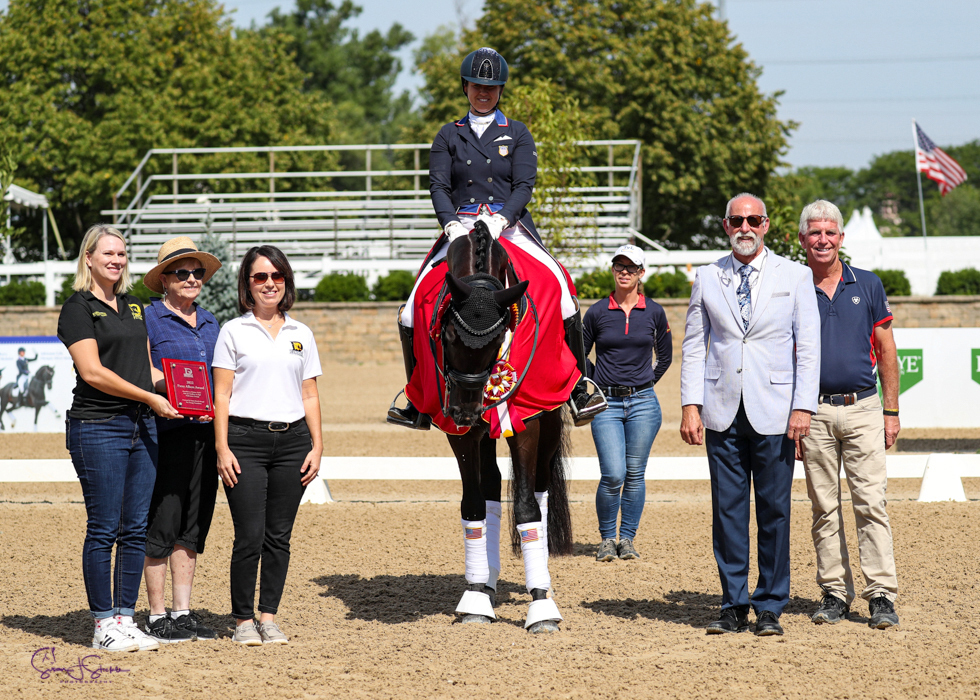 The Dressage Foundation has announced that Katie Duerrhammer is the recipient of its 2022 Patsy Albers Award, which was first awarded in 2013 in special remembrance of Patsy. The $2,500 award provides financial support for continuing education and training to an FEI-level rider.

Duerrhammer (Greenwood Village, Colorado) and Kylie Lourie’s 2011 Westphalian gelding, Paxton, were named Reserve Champions in the USEF Grand Prix Dressage National Championship at 2022 U.S. Dressage Festival of Champions. The Patsy Albers Award is given to the highest placing Grand Prix rider at the Championship who also competed for the U.S. at a previous North American Youth Championship.

Duerrhammer said, “I am so honored to receive the Patsy Albers Award for the second year in a row. Last year I had the privilege to receive it on Quartett, who attended the 2022 World Championships, and this year on Paxton. Young Riders was an incredibly special time in my career. It gave me my first chance to compete on an international stage and inspired my drive to represent the USA in the future! I am so thankful to Elizabeth Johnson, my trainer during NAYC, and Pam Brown-Schachter who owned my wonderful Young Rider mount, Millennium, for inspiring me to reach for the stars! I am also beyond grateful to my current sponsor and owner of both Quartett and Paxton, Kylee Lourie, and my current long-time trainer, Adrienne Lyle. I hope that the young riders out there at NAYC realize what an honor it is to represent the USA on a team and can let it inspire them in the future! Thank you to The Dressage Foundation for creating such a special award honoring a wonderful woman!”

Patsy Albers, one of the nation's best-known figures at dressage shows across the country, passed away in October 2012. She was a longtime supporter and Chef d'Equipe of the North American Youth Championship Region 1 team and was very involved at the prestigious Dressage at Devon, where she served for many years as the FEI Event Director. Patsy’s expertise also extended into management, officiating, and volunteering, for which she was honored multiple times.

“It is an honor for The Dressage Foundation to present this prestigious award in Patsy’s memory,” said Jenny Johnson, TDF’s Executive Director. “We are grateful to all the donors throughout the past 10 years who have made it possible.”