Sarah Geikie: "What Judges Look for at Fourth Level" 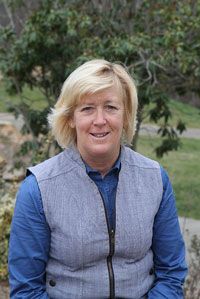 Fourth Level is the stepping stone from the USEF National Tests, to the FEI level of tests, which starts with Prix St. Georges, progresses to Intermediare 1 and 2, finally culminating in the Grand Prix.

Fourth Level Test One has similar movements as found in Third Level Test 3. New movements in Fourth Level Test 1 include showing very collected canter steps on the circle and doing three flying lead changes on the diagonal. Fourth Level Test 2 introduces the quarter-turn working canter pirouette, as well as three four-tempis. Fourth Level Test 3 is a bigger jump in difficulty than test one and two. In the Test 3, there is the Schaukel. The Schaukel is a rein-back four steps, forward four and rein-back four then immediately forward again. The horse must be forward-thinking throughout this movement and stay over its back. Also in Test 3 are working half canter pirouettes as well as tempi changes to fours and threes, as well as one counter change in canter where there is a canter half-pass to the right, a flying change, and an immediate half-pass left and flying change.

Fourth Level 3 introduces more difficult movements testing the horse's degree of collection and balance. There is less ‘breathing' space in Test 3, so it requires the horse to be strong and balanced enough to sustain collection for a period of time.

Let's take a look at some of the key movements at Fourth Level, especially the movements that have double coefficients:

First, there are the walk pirouettes. It is surprising how often these are done poorly, or one is done well, and the other direction is done poorly. Pirouettes in the walk teach the horse the mechanics of pirouettes in the canter. The pirouette requires that the horse (and rider) have a thorough understanding of the turning aids in combination with the bending aids. The horse is bent in the direction of the turn, and balanced over the inner hind leg, while maintaining the rhythm and footfall of the walk. Pirouettes are performed from the collected walk, in which the walk steps must become shorter and more active. This will set the horse up to do a turn that will be able to sustain the rhythm of the steps as well as the balance. One of the biggest rider errors when performing the walk pirouettes is that the walk steps are too long, free and often the balance is on the forehand. If this is the case, the horse will end up stepping out with the outside hind, sticking with the inner hind, or simply have too much weight on the outside shoulder. The inner leg and seat bone of the rider is the important emphasis of the aids, as they regulate the bend and activity of the inner hind leg. The rider's aids consist primarily of the leg and weight aids. The rein aids, especially the inside rein, are secondary, and should not overpower the other aids.

As in the walk pirouette, the preparation is the key to success. Very often riders come in too fast, lacking collection, resulting with the frame and balance too much on the forehand. There are really four phases to riding a good pirouette. First is the preparation, where the rider must create more collected steps. Next is the beginning of the pirouette, where the rider initiates the turn with the outside aids and engages the outside hind leg of the horse. The third phase is the pirouette itself. Here the rider must make sure to sit slightly to the inside of the turn, to allow with the inner rein and support with the legs and core. The last phase is the transition out, where the rider must make sure to control the ending so the horse does not overturn, but comes out straight and shows the collection for a few strides after the pirouette. Control is a key word here, where control of the movement and the balance are maintained.

Next we have the four- and three-tempis. Clearly, the counting is a huge factor to success with these! It is extremely important that the horse is very reliably on the rider’s aids for single changes. The other very important ingredient is that the horse needs to be straight! He must be straight on two levels. First, he must be straight on the line of travel, where the shoulders are in front of the hind legs, and the horse's spine follows the line of travel. The second layer of straightness is that the horse should be taking even weight on both hind legs and be even into both reins. When horse and rider can master these two elements, the tempis can then be successfully developed.

The last movement, the Schaukel, is a movement that does require practice and correct aiding from the rider. This movement tests the horse's suppleness, especially over the back, the degree of throughness, as well as the correctness of the rider's aids. The horse needs to think forward throughout this movement, and it should flow, with no interruption. The rider needs to keep the horse connected on the seat and back. The quality of the halt at the start of this movement has a big effect on the rest. The horse must step with the hind legs into the contact during the transition and stay reliably on the bit and the rider’s aids. Getting the correct count of 4-4-4 is necessary. This indicates that the rider has enough control of the balance to get the correct number of steps. The judge assumes that the rider can count!

Some final advice to riders is to study the movements that have a double coefficient. Practice them. Make sure you and your horse understand how to ride them correctly and then practice! Judges want to see riders and horses be successful so we can give good marks. Do not present your horse to us unless you are able to perform ALL of the movements in the test.

About the author: Sarah Geikie is a USDF Bronze and Silver Medalist, and successful competitor through Grand Prix. She is an FEI**** (C) Dressage Judge, USEF S Judge and a USDF Examiner and Faculty Member, who is also certified through Fourth Level. Sarah was the 2011 recipient of TDF's Major Anders Lindgren Scholarship for Dressage Instructors.