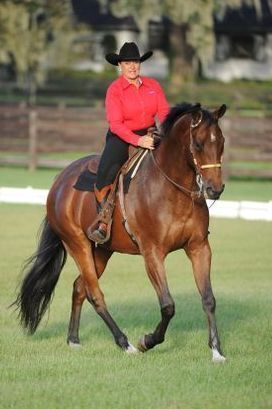 The Lynn Palm Future Star Award was established in 2021 to give back to the sport Lynn loves, and to support education for Western dressage. One $2,000 Award will be presented annually to the highest scoring Junior rider (age 17 and under) at the WDAA World Championship Show. The highest scoring Junior who competes in Intro, Basic, Level 1, Level 2, Level 3, or Level 4 classes will receive $2,000 and a plaque. The Award will be announced at the WDAA World Championship Show’s Awards Celebration. Lynn Palm's career highlights include 2007 American Quarter Horse Association (AQHA) Horsewoman of the Year, a record four AQHA Superhorse wins, AQHA Female Equestrian of the Year by the Women's Athletic Association, named one of the top United States clinicians by Horse & Rider magazine, over 34 AQHA World and Reserve World Champions, 7 WDAA World Championships and over 50 bridleless dressage exhibitions at events including the National Horse Show, 1989 World Cup, the 1996 Atlanta Olympic Games, and World Cup. The Dressage Foundation is honored to present this award in honor of Lynn.

Past Recipients:
2021: Anna Droegemueller and Pendragon
2022: Kehan Cox and Equinox Courage Under Fire